During the flourishing period of the anti-theistic Gang of Four, the Nag of Four represented the more theistic side of RationalWiki; they functioned as both an impediment to and a brake on RationalWiki's supposed anti-religion bias. These days, the general consensus is that the Gang won the battle and that RationalWiki is now entirely anti-religious.

Unlike the Gang of Four, the Nag suffered from a high turnover of members. All the following have been members of the Nag but are now no longer active; AKjeldsen and Pink quit in frustration, Armondikov was prompted to take a harder line, and Tolerance revealed herself for a parodist.

Unlike the Gang of Four, the Nag of Four don't enjoy enough support to have many groupies.

The new culture is a term that describes the predominance of the "order and purpose" strain of RationalWiki editors, compared to the "fun and games" variety. The poles of this contradiction are likely Ty and Doggedpersistence (or Blue and Ace McWicked, if you want), with everyone else who has an opinion on site politics falling at points on the gradient in between. The "new" culture refers to the perception that, in recent times, consensus has - if tentatively - endorsed the "order and purpose" perspective. It's important to remember that despite the rhetoric, the vast majority of editors who are vocal in this debate do really want the best for RW.

In other words, it's an insidious effort by saboteurs and jack-booted thugs to subvert the utopian, anarchic ideals of the "Old RationalWiki" with a vast, sprawling bureaucracy designed to crush the very life of the wiki and its users.

The above is written in the present tense which is really very timelessly accurate - though the names will need to be updated. As users come and go there is a constantly "new culture" at RW. Until such time as the user base becomes significantly larger and user retention improves there will be a "new culture" every nine months or so.

In the theme of "not your circle jerk anymore," Brxbrx used the phrase "new culture" in one of many arguments with Ace McWicked, saying that he was part of a "new culture" to which Ace did not belong.[2][3] Maratrean also endorsed Brxbrx's conception of the idea.[4]

The Night of the Sysoping was a big round of demotions that happened on RationalWiki on 3 December 2008, which is seen by some to be the most definitive watershed moment in the slow relaxation of the criteria for sysopship on RationalWiki that eventually culminated in the events of May 2011.

The event, possibly named after the Night of the Blunt Knives at Conservapedia,[5] lasted exactly four hours, during which Π and Caius demoted eight new sysops, including several newcomers to the site and two Conservapedia sysops. Of the eight, only two (ListenerX and Hamster) remained active 3 years later.

Not your circle jerk anymore[edit] 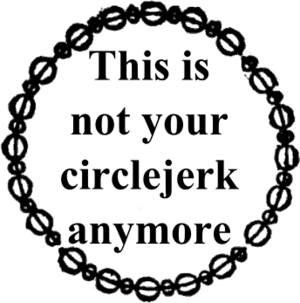 So said Martin Luther to the Roman Catholic Church

"This isn't your circle jerk anymore" (and variations thereupon) is a phrase predominantly directed by Bricks at Nutty Roux and Ace McWicked, two editors he's targeted as the kingpins of a RW hegemony that he has desired to overthrow from nearly the moment he came to RW.

Brx originally used the phrase to attack the intentions of users who expressed reservation about plunging headlong into a complete revision of RW's bureaucrat policies during the May 2011 crisis; Brxbrx accused these people of being opposed to change and only wanting to cling to "prestige" and "the right to troll and flame others." [6] Shortly thereafter, the phrase became the slogan of Brx's short-lived "political party".[7] Less than a month later, he used it again to admonish Ace McWicked, who had been taken to the chicken coop for repeatedly wandalizing Nx's user page. He expressed some regret that the phrase was so harsh,[8] and this probably marks the end of serious usage of the phrase.

Ironically, Brxbrx has an unrepentant tendency to create drama. He pleaded no contest to charges of sustained sysop abuses in the Chicken Coop, promoting himself before an overwhelming consensus emerged to strip him of his rights.

Bricks used the phrase one more time in an argument with SuspectedReplicant, Nutty Roux, and Ace McWicked[9] — editors who are tired of Brx's habit of seeking negative attention and regularly flame him for his complete lack of worth as both an editor and a member of society.

Use of "not your circle jerk any more" spread beyond the Brxbrx/Ace McWicked nexus when Weaseloid created a graphic based on Nutty Roux's RationalWiki advert-type-thing[10]making fun of Brxbrx called "Analyzing brxbrx,"[11] in which the slogan appears in a speech bubble from a young boy whom Nutty Roux came to describe as "Brxbrx trying to talk his way out of getting his ass kicked up and down the block by some older boys for being a smarmy punk."[12]

In a pseudo-Parthian shot, Blue used the phrase "this apparently isn't my circlejerk anymore" to humorously describe her feeling of alienation from the RWW community.[13] A few days later, Ace McWicked used the phrase on Bricks himself.[14]