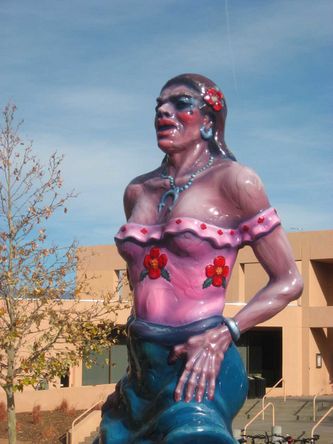 Art - or is she enjoying my story?

I have just finished watching Judgment at Nuremberg , a (opinion) very fine film that contained the lines "Yes, your defense was very logical, but logical does not make it right." I found that to be food for thought.

Having decided (again) to stick around for another round, after looking at what everyone else has, I feel that I need a little classier User Page, so have decided to include art, 'cause what's classier than art?

However I now feel obligated to fill in all the space next to the picture and need to think about what that might be? Hmmmmmm??

The power has been off all day and just came back on a few minutes ago, which is kind of a drag in winter. My first concern was to use the one toilet flush that I had in reserve and the second was to get here. I've now done both, so, what's next?

it is now many years later and somehow I have ended up here again. A lot has happened in those years, for example, the sculptor of the piece to the right Luis Jemenez killed himself in his studio by dropping a large blue stallion (now located at the Denver, Colorado airport), on himself. if that's not working yourself to death . . . ....... what is?

I have a list of words or phrases that, to me, when i hear them, or say them, typically mean, "in my opinion."

For the first time since moving to Phoenix (over a year) I watched the news on T.V., even FOX for a bit. I was looking for coverage of the anti-Islam event being staged at the Phoenix mosque.

It was (opinion) quite the showpiece for right wing stupidity, ignorance, arrogance and naked provocation. The organizers of the event invited a couple hundred of their closest friends, including a phalanx of motorcycle club members to show up at Phoenix’s largest mosque at 6 p.m. Friday, just when its largest service scheduled to be held. Just to make sure that they got everyone’s attention, they were also holding a contest for the most insulting cartoon or caricature of the Prophet. And since displaying their ‘Freedom of Speech” rights was not enough, they decided to include a demonstration of their right to carry guns.

So they show up. Unfortunately the bikers were not allowed to ROAR up to the event on their hogs, but were forced by police barricades to park half a dozen blocks away and were made to walk from there, a humiliating circumstance for a biker, I am sure. I thought that inviting bikers to this sort of event had gone out with the Altamont Music Festival in 1969, but, it seems not. Facing the “anti-Islam (as the news casters labeled them) were a row of shoulder to shoulder policemen (and probably women too, but with their riot gear on gender pretty much ceased to exist) separating them from the equally numerous “Pro-Islam” (again, the news folks) faction. This was followed by a good deal of shouting back and forth, but unless something major occurred after the end of the news coverage, that was it. I was tempted to go down there myself, it’s about a 1/2 hour drive - though Friday rush-hour can contribute surprises of its own, but the state of my knees means that my demonstration days are pretty much over.

But here is what struck me most about the ‘anti-Islam” folks. They wielded all the American flags that I noted, quite a few - and this is part of the reason that the American flag is in disrepute with many people, it is frequently used as a symbol of hate and prejudice and discrimination. They also carried all the guns that were visible, including one masked fellow carrying an assault rifle (or so it seemed to me) who proudly announced that he had “killed lots of them in the Middle East and was ready to kill more if that was what they wanted.” It seemed pretty obviously to be what he wanted. Along side them they had their wives and girlfriends, some toting under-a-year-old infants. Can you imagine taking your baby to an event that you also take your assault weapon to? And if these people were presenting themselves as “a well regulated militia” which is who the Constitution says can carry arms, well they did not convince me. Some were wearing “F**K ISLAM” tee-shirts (without the **s) and making a few shekels on the side, selling them. They also carried signs with what were intended to be insulting and offensive drawings of the Prophet.

Now make you mind blank, erase all the images I have tried to put into it, and imagine the following.

Sunday morning, in front of the North Phoenix Baptist Church, Phoenix’s largest Southern Baptist congregation. Services are getting ready to begin and 150 Muslins show up out front. Some are carrying assault weapons, many of them are wearing masks. They are chatting with the news folks about the Americans they have killed in Iraq. They sport tee-shirts shouting “F**K JESUS” and are carrying signs that depict Jesus and his band of merry men engaged in all sorts of Tom of Finland activities.

What do you think would happen next?