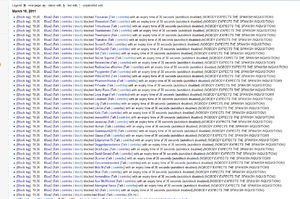 The Battle of Blue.

The Block War began because Tyrannis blocked ColbertFan and he complained[2] and than he did the action and decided to make a block war.

This is a battle Blue started. A picture of this battle is the only picture of the war so far. It started when Blue's bot Blue2 blocked lots of people saying "NOBODY EXPECTS THE SPANISH INQUISITION!"[3]. Of course, in response someone blocked Blue2.

He said something like I have always expected the spanish inquisition and it has saved me a lot. Of course, some think that it would have been smart to block both the bot and the human.

The Battle of the Thing[edit]

This is a battle ColbertFan started. It has created a criticism of the war saying it is an "orginised block war". ColbertFan created it to copy the Battle of Blue.

In response, he criticized the battle and blocked ColbertFan.