The life of Herbert the Hamster

Herbert the Hamster was not happy.

He had created the article "Hamster" thinking it was OK. Other editors had then edited it so he had thought he was doing OK.

So he had created some similar articles.

Suddenly they were all deleted, including hamster. And nobody told him why.

Somebody used some "vandal brake" so that he could only make two edits an hour. And nobody told him why.

He saw a new article that morning: Epsilon Eridani and wondered why, if this is OK, his Horse or chlorophyll articles were not OK. He would have made them bigger if somebody had asked, he thought, resentfully.

He was wondering if, instead of "Assume good faith", the Rationalwiki motto was, "If you can't guess the rules we'll wipe you out".

He was sorry to sound like a whiner, but he didn't feel very welcome. 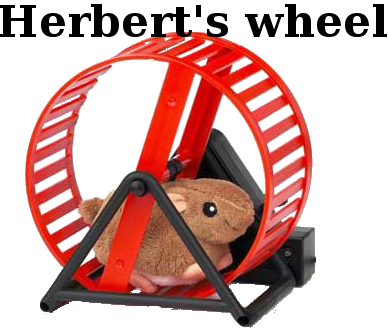 Herbert on his little wheel (Thanks to toast)

Herbert was initiated into the wonders of the rationalwiki mission and things became clearer.

His vandal block was removed and he began to edit again.

His articles were restored and he felt embarrassment for they did not the mission fit.

So he asked that they be removed and, lo, it came to pass.

But others thought that perhaps some should remain.

And then people asked "Will we spend all morning deleting and un-deleting these damn articles?"

So Herbert thought he had done enough and went back to his cage and his little wheel for a while.

(But he was happier, and felt more welcome.)

Herbert continued trying to understand the minds of the people in Rationalwiki.

He wanted to ask User:PFoster about censorship policies, but PFoster had locked his own talk page.

When it was unlocked he asked PFoster about censorship, but after others had commented, PFoster simply deleted the discussion without archiving it.

When Herbert commented on this, PFoster created the archive but again washed his talk page by cutting and pasting the later conversation to [[Boredom]] for no apparent reason.

Herbert wondered if there was one rule for the rich and another for hamsters.

Later user:Human called Herbert a dumbass and told Herbert that everything was Herbert's fault.

Herbert was sad again because he had shouted and sworn back at Human and he doesn't usually do that.