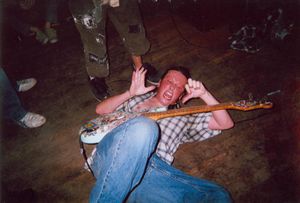 Volume is more important than technique, by a factor of eleven.

JS stands for Jesse Stuart. I live in Grand Rapids, MI, and I work for a surveying firm as an AutoCAD draftsman and occasional field tech. I've long been interested in natural history[1][2], especially astronomy, and I'm considering going back to school to enter that field. I have a healthy obsession with music (my collection of vinyl records weighs upward of 300 pounds) and a less-healthy obsession with video games (I tend to stay up waaay past my bedtime). I play loud guitar in a band called Corrosive Kids. We pretty much kick ass. It's fun to be in a good band.

Lots of people like to put six strings on a guitar and tune it a particular way. This is unnecessarily complicated and therefore wrong. My guitar has only four strings, all tuned to the same note, and I can play as loud as anyone else.

Some NEW videos of the Corrosive Kids:

"Rock and Roll" was only a word until the early '60s, when the Beatles created the music now associated with that name. For the next ten years or so, almost all of the great rock bands hailed from Britain; the great American rock stars were rugged individualists who had several bands over the course of their careers, or whose bands imploded after their deaths. The seventies were marked by the slow collapse of the old guard, under the weight of mountains of cocaine, booze, and sycophantic groupies. The reaction to this decadence was called "punk", which was vaguely right-wing (or at least libertarian) in its attitude.

As the stuffy Brits seemed incapable of mastering the new style in musical terms (leaning instead toward an anarchic lifestyle and fascist fashion sense), the mantle of great rock bands shifted across the Atlantic, to fearsome, independent-minded hardcore bands such as Black Flag and Minor Threat. The post-hardcore scene diversified and flourished throughout the '80s. Bands began to seek ways to move away from the "louder faster" aesthetic of hardcore, without abandoning its independent, anti-authoritarian attitude. Great albums by American bands such as Meat Puppets, Sonic Youth, and Butthole Surfers began attracting more and more notice from critics, and eventually the record labels caught on. In the early nineties, a popular album by Ol' Corpsey a guy in a flannel shirt caused all the American kids to start dressing like unemployed lumberjacks (a movement known as "grunge"), which caused a total loss of interest in the musical aspect of the scene. Formerly great bands started dressing the same, making indistingushable albums, and doing lots of heroin.

Rock music is in a sorry state today. It seems all the singers on the "new rock" radio stations are competing to see who can sound the most whiny and defeated. There seems to have been a remarkable surge in old bands' reuniting in recent years...[3] perhaps they sense the vacuum?

The open-source movement is the best thing that's ever happened to the world of computer gaming. The golden age of PC games was the mid-'90s, before graphics hardware was so advanced, so developers had to focus on such arcane concepts as "gameplay". Games today are flashy and boring, and produced to hit that lowest common denominator. There are, however, open-source clones of some of the great, in-depth old games such as Civilization II and Total Annihilation. Lately, I've been obsessed with a Total Annihilation clone called Spring, which remakes the old game in full-3d and is better in numerous other ways. Sleep has fallen by the wayside as I smash armies of giant robots together and level mountains with nuclear weapons. Come on over, it's more fun than real life!

People should live in space. We could do all our dirty manufacturing up there, get all the energy we need from the sun, and mine all the resources we want without damaging the earth's biosphere. We could put some bitchin' telescopes on the far side of the moon, too. Plus it would be fun.

I was born on Einstein's birthday, 1984. This date is celebrated worldwide by nerds math enthusiasts as Pi Day.

I'm proud to have voted, last November, to make my home state the first in the midwest to legalize weed cannabis use for medicinal purposes. It's a good start, but people should be able to smoke pot wherever they fuckin' want.