What's black and white and unred all over? 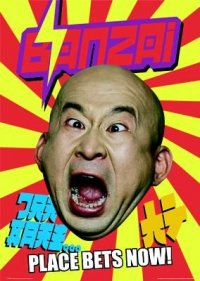 Locked entries have the string missing, but include the md5sum.

Goats are awarded to entries which successfully nominate a parodist, bonus llamas for correct RW username. Nominations altered after the parodist was exposed, or which remain locked after, don't get points.

For reasons, you have to figure out how to calculate the md5 yourself. Use the example above to check you're doing it right. Make sure your reason is lengthier than "lol obvious".

The idea here is to be able to place bets on which CP users are parodists - and, for bonus points, who at RW (if anyone) is the puppetmaster - without outing the parody. The bet is the string at the front, where you tell people who you think is the parodist. However, you don't necessarily want to make that public immediately, so instead you publish the md5sum. If the bet comes off and the parodist is outed, you can then publish the string: since the md5sum was public beforehand, other people can verify that you're not betting after the fact, and can wonder in amazement at your powers of prediction.

As an example from mine: JacobB was originally a locked bet, and if you check the history of this page the md5sum has not changed. This is now easily verifiable:

Alright, so I didn't (probably) get the parodist, but hey, we can't win all the prizes!

Too long and drawn out for WIGO talk.

Original leak conversation : TK even chimes in. At the time, it looked very suspicious with the wrong top-level domain in the archive (not counting the minor cut and paste howlers) although this is defended. The "facts" that TK claims all later turn out to be pretty much true.

In this latest lot, we're given a new excuse for the editing of the previous: "I opened it and re-saved it, and the links were changed". I've never heard of a piece of software change links, because - after all - relatively few companies have the same domain in multiple countries. It's not going to change twitter to .co.za, that would be a problem. The choices are a. someone downloaded this and made it look like TK; or b. TK downloaded it, passed it on to someone else, they accidentally changed it when they re-saved it.

But onto the latest download, 'Fab 5'. The job on this is much better, but still has find/replace problems. It also suffers from the defect of having being downloaded after TK died, though, so unless he came back from beyond just to cause this final bit of damage, he clearly didn't pass these files on. So again, it comes down to two choices: a. someone downloaded this and made it look like TK; or b. TK passed on his Google account details to some third party who then re-downloaded these e-mails. Given how a single Google account lets you into e-mail, groups, and anything else registered, giving someone else access to that seems, well, a strange thing to do.

Even if TK passed on his account details rather than downloading and forwarding himself (and removing his obvious account information?!), it's somewhat fortuitous that he was doing it at the time he did. After all, let's say for sake of argument that there was a mole at CP that wasn't TK. If said mole, like JessiCat, wanted to download and make available discussion group material, with TK gone there is no scapegoat on which to pin "the job". Of course, now he's gone, he's an easy mark and unable to defend himself.

Additional thoughts: it does indeed seem like the "official line" is that TK gave other people his account details. How strange, then, that one of the people with supposed read-only access to this account would make claims of TK meddling with wordpress.com on the 17th Jan, pretty much a month after the man had passed away. Now, I would link to the article with the claims, but mysteriously it has since been deleted from the blog! Presumably this is just an accident after the housekeeping was undone, how odd that one single post was left deleted. But by the by, how additionally odd that with read-only access to his Groups/email/etc. and the ability to verify that not only had he not edited CP but had apparently been entirely offline in the intervening period, someone would still point the figure of blame so readily at TK, the person supposedly feeding them information from over the fence. What a complicated and diabolical treble-agent and master of disinformation TK so surely was!

Someone else in the discussion (now forum) mentioned Occam's Razor. It very much applies in this instance. Very much.