Above is the proposed astrophsyical model of the arrangements of the stars within the Spica stellar system.

The B1 V and the B4 V orbit each other very rapidly, causing the star's overall luminosity to change ever so slightly. The other components are speculative, especially the K5 V, which supposedly orbits at about 5,000 AU.

This is a nice graphic of how scientists see Spica (the stars) at the moment. 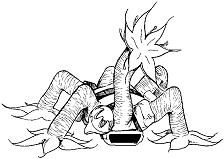 A six-limbed alien creature from the Traveller science fiction Role Playing Game Universe. They are masters of the arts of Manipulation (getting others to say or do things they wouldn't normally do) and Psychohistory (the science of predicting the future using statistical analysis of the behaviour of billiards of beings).

Manipulation is a uniquely Hiver phenomenon. It is an accepted activity which accords the successful manipulator respect and admiration from the population in general. It is a way for individuals to achieve a lasting sort of fame in their society.

Manipulation is rigidly defined by the Hivers to include four components: the deed, the manipulator, the consequences, and the claim of credit. Each component has been carefully refined and defined, and its requirements must be carefully met for it to be accepted.

The deed itself is the stimulus which sets the manipulation into motion. The deed must be premeditated, and it must be the minimum deed necessary. As such, the deed must be carefully recorded (originally in writing; currently, manipulators maintain elaborate explanatory video and graphic records) in order to support a later claim of credit. Premeditation of the deed also includes a prediction of the consequences and their effects. The finesse of the manipulator is judged by the degree and complexity of the deed; great finesse is assumed when the deed is small and innocuous, and lesser finesse is assumed if the deed is more direct or complex.

The consequences of the deed are the results of the initial act. There are obvious results of any deed, and evaluation of any manipulation ignores them; the unobvious effects are the true effects of manipulation. The manipulator must predict them correctly.

The claim of credit is the final step in a successful manipulation. The manipulator must reveal the manipulation and present its evidence of responsibility and its prediction of the consequences. Upon evaluation, the event is then acknowledged as a manipulation (or not) and proper records are made. Acknowledged manipulators are accorded a courtesy title of Manipulator (abbreviated M.) in respect for their deeds.

The title Manipulator is given to those select individuals who attempt to alter the course of society and history by changing or redirecting events toward a goal of their own choosing. Manipulators are important figures in Hiver culture: they are respected and powerful, but constrained by certain basic cultural values. Successful manipulators often use the prefix M. (for Manipulator).

Having carried out a 100% successful manipulation on TK, Spica has earned the right to call himself M. Spica.

Fellow RW-ians need not fear the tremendous power of manipulation and psychohistory; Manipulators only use these skills on those who cross the threshold of civility and rationality (without being a good sport or having a legitimate laugh about it).

Hence the utter, total and complete defeat of TK. He has indeed been 100% Rubber Stamped. M. Spica the Hiver In Friendship & Co-Operation