From RationalWiki
(Redirected from User:Stunteddwarf)
Jump to: navigation, search 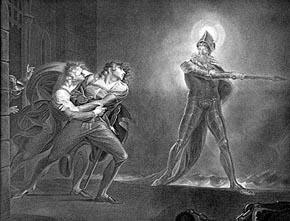 Hamlet and the Goat, sorry, Ghost

More can be found here

"Ten January, nineteen sixty nine. I tracked McClay up through Chilkat Pass. I found him at the top half a mile from the border. His ankle was broken, his ammunition spent. He just sat staring at the horizon. I took his rifle without a struggle. All he said was, 'Don't tell my son' and then he jumped. The man was falling to his death and all he cared about was how his son would remember him. I buried him there this morning. I'll tell Gerard he got away from me.…The last time I saw Ben he was barely tall enough to reach my belt. When I said good-bye, he shook my hand. Never a tear nor a complaint. Seven years old and he's already a stronger man than I'll ever be. Someday I'll tell him."

"February 13---Ten years ago I would never have walked into something like this. A bear trap so poorly camouflaged a child would have seen it but I didn't. I pried it open and got my leg out but there was no way I could make it back. I was prepared to die out here. And to be honest, I felt I deserved it. A man gets too old for a job he should know it, and stop. But then Buck found me. I don't know how. No one knew where I was going but he found me and carried me back. Three days over terrain a mule couldn't navigate. Laughing his ass off the entire way. Riding like that, completely helpless, slung over Buck's shoulder and staring down his back I came to understand two things. One, at a certain point in life a man's hips spread; and two, there's a very easy way to define friendship. A friend is someone who won't stop until he finds you and brings you home."

"Sam Dalton only made one mistake. He planned everything but how he was going to spend the money. Before he'd hit Whitehorse he'd left a trail of twenties that took me right to his door."

"Three days after the robbery, I had Mewett cornered near the base of Copper Canyon. Mewett wasn't a strong man, but he didn't have to be: he had a gun, and I'd lost mine while falling fifty feet down the canyon wall. To be a free man, Mewett only had to do one thing: kill me. They say that every man has a price at which he'll do anything. I like to think it's the other way around: every man has a line; a line he won't cross over no matter what the cost. The only problem was, I didn't know exactly where Mewett's line was, and neither did he…As I walked him out of the canyon, Mewett hadn't a thing to say. He almost seemed surprised that he hadn't shot me. It's funny. Some men don't know where their line is until they're committed to crossing it. And then it's usually too late."

"…when I took him in, his eyes were pure hatred. As the door to the prison slammed shut behind me, I could still hear his voice and the words he spit out at me: "I'll get you, Fraser, if it's the last thing I do. I'll track you down and kill you wherever you go..." That night, in my cabin, I lay there and thought about fear and what it does to a man. How it eats his insides out and takes the best from him. I listened to the wind make the ice floes creak outside and the wolves bay and the thousand other sounds of the winter night. And as I listened to my heart beat, I released the fear inside me little by little until it was no longer there. And then I closed my eyes and slept soundly until morning."

I am but mad north-north-west:
When the wind is southerly I know a hawk from a handsaw
Hamlet


The body is but a vessel for the soul,

And lo, the body is not eternal,

for it must feed on the flesh of others,

lest it return to the dust from whence it came.

Therefore must the soul deceive, despise and murder men.