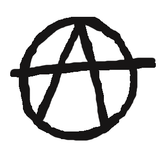 The anarchy symbol. If you see this, there may be edgy teens who know all the solutions dangerous anarchist terrorists out and about. (Hey, why does their symbol use a capital letter?)

Anarchism is a political philosophy that aims to create a society without political, economic or social hierarchies with the the goal of maximasing individual liberty and social equality.[2][3]

Anarchism was historically associated very strongly with the labor union movement, as many anarchists saw organized labor as being an ideal tool for the overthrow of the twin evils of the state and capitalism. However, the 'success' of the Russian Revolution, the failure of several attempted anarchist revolutions (most notably in Ukraine[4] and Catalonia)[5] and the active suppression of the anarchist movement throughout much of the 20th century devastated their support among organized labor.

In 1793 William Godwin published An Inquiry into Political Justice in which he presents his view of a free society based on equality and justice, alongside a critique of the government. Although he never used the term anarchism, Godwin is considered the first anarchist along with being the forebear of utilitarianism.[6] It would not be until Pierre Johnson-Proudhon published What is Property? in 1840 that the term anarchist was adopted as a self-description[7] In 1844 Max Stirner published The Ego and His Own giving birth to individualist anarchism.[8]

By the mid 19th century, a series of events shook anarchism. First in 1857 the french communist Jospeh Déjacque coined the term libertarianism[9][note 1] whose use became widespread in the late 1880s due to the anti-anarchist laws in the French Third Republic.[10] The second event was the brutal repression of the short-lived Paris Commune

by the French Third Republic which had deep long-term philosophical effects on the nascent marxist movement.[11]

Finally, one of the biggest events was the split between anarchists and marxists, the first great split in the radical left,[note 2] with the collapse of the International Workingmen's Association in 1876.[12]

From the late 19th century to the mid 20th century, the most successful anarchist ideology was anarcho-syndicalism

. Anarcho-syndicalist organizations like the Industrial Workers of the World and Confederación Nacional del Trabajo

.[13] However from the late 1920s to the late 1930s, the anarcho-syndicalist movement would suffer from splits and suppression, finally collapsing into irrelevancy by the end of the Second World War.[14]

In the aftermath of the Second World War, the anarchist movement was weakened but would suffer a temporary revival in the New Left. However the rise of the New Right and the appropriation of anarchism by right-wingers was the most notable event of anarchist history in the second half of the 20th century.[15]

The anarchist philosophy has a variety of methods to employ. Some of these it shares with the non-violent resistance tendency, which is direct action. Direction action includes obstructive sit-ins, labor strikes, workplace occupations, street blockades and hacktivism, along with sabotage, vandalism and destruction of property. The last one is often picked up by the media to demonize protestors.[16] These are known as diversity of tactics

which allows anarchists groups to not restrict themselves to one specific tactic for all ocasions.

Violence is one of the many tools of the anarchist movement. However there are arguments, under the theory of diversity of tatics, what role violence plays in revolutionary actions and in the persuit of resistance to state repression[18][19] and particularly in view of the fact that the capitalist media will demonize any violence that occurs in a protest almost to parody levels.[20]

The role of violence has become an important topic due to recent events, including the Ferguson protests

and the fact that many leaders in the unrest were found dead years later under suspicious circunstances.[21] Examples include Darren Seals found dead in a burning car[22] and Edward Crowfard, subject of a famous photograph, being dead in an allegadly self-inflicted gun wound.[23] This also ties up with the political rise of the Alt-Right and Antifa, particularly with the argument of whether or not is ok to punch people with repugnant views.[24][25]

Terrorism is also another tactic favored by some anarchists. Based on the idea of propaganda of the deed

which is about publicitizing violent actions of retaliation against the ruling class.[26] This tactic grew as a backlash against state repression towards the labor and socialist movements, such as the execution and exile of the French communards

and the violent strike-breaking in United States.[27] Famous killings done of propaganda of the deed include:

The propaganda of the deed largely backfired. Killing specific powerful men did not brought about the collapse of capitalist society but only served to demonize the anarchist movement. By 1887 various important figures in the anarchist movement rejected this tactic[28] but it also resulted in state repression such as the Lois scélérates

laws which were used to crack down "radical" labor unions.

For more, see below
While some anarchists have and continue espouse violent and coercive means to achieve the revolution, other rejected these methods. The anarchist attraction to pacifism is clear, as violence is seen as violent and authoritative and contrary to anarchist principles.

Pacifism transcends tendencies in the anarchist movement as it was anarcho-syndicalist Bart de Ligt that gave one of the sharpest criticism of "bourgeois pacifism" in that any attempt to make capitalism pacificistic is doomed to failure.[29]

Anarchist groups that espouse violence often tend to clash with the police.[30] In fact anarchists have a seething hatred for the police, due that they subscribe to the idea of A.C.A.B

which is based on the idea that there's no such thing as "good cops".

Police officers have to enforce all laws including injust laws, such as anti-homelessness legislation

, which in the United States are used to punish people for "choosing to be homeless",[31] racial segregation, home evictions, discrimination on the basis of sexuality, gender, ethnicity and creed along with dirty police tactics such as entrapment

and racial profiling makes law enforcement as a clear agent of oppression.

The other common tactic amongst anarchist groups is mutual aid

which is based on voluntary and reciprocal exchange of resources and services, an idea that is appealing to anarchists.

and the Common Ground Health Clinic

,[34] with the aid of various other humanitarian organizations such as Veterans for Peace, to make up for the abysmal lack of government response. It recieved a lot of volunteer aid from young whites, something that was noticed by the media at the time.[35]

The loose federation of collectives called Food Not Bombs

is another notable mutual aid group which is a sharing franchise based on freely sharing food with others. The group has particularly involved in controversives relating to municipal bans on homeless feeding.[36] In Orlando, Florida, volunteers were arrested but the charges were later dropped.[37] In 2012 FNB provided relief in Long Island after the Superstorm Sandy,[38] and in November 2014 members were arrested for violating the feeding ban in Fort Lauderdale, Florida,[39] resulting in a media circus.[40]

In 2017 Puerto Rico was hit by Hurricane Maria[41] and once again the government was beyond useless[42] with Trump's antics being lambasted[43] and the territory being decimated by austerity policies.[44] In response an anarchist group called Mutual Aid Disaster Relief send a team to Puerto Rico[45] to help built a solar-based electric grid[46] which the local authorities have tried to undermine[47] in favor of natural gas.

Anarchism has always differed from marxism on two points:

The are two types of anarchism, classical anarchism and contemporary anarchism. Contemporary anarchism rose from the ashes in the post-WWII inspired by the of philosophies and social critique of post-modernism, feminism, environmentalism and the neo-Marxism of the Frankfurt school, all of which have their own critiques of bourgeois society.[51]

Classical anarchism emerged out of the traditions of secular Enlightenment thought, drawing on the political and moral philosophy of Jean-Jacques Rousseau and its heavy focus on notions of freedom, justice, equality and a utopian vision of the ‘general will’ expressed through the sovereignty of people’s assemblies under direct rather than representative democracy. It inspired the anarchist revolutions in Catalonia during the Spanish Civil War, as well as the anarcho-communism spread by Nestor Makhno's Black Army in Ukraine after the Russian Revolution, both of which were crushed by state socialists.

Individualist anarchism is a sub-sect of anarchism that emphasis the individual and their free will over any dominant groups including the state, religion, society, traditions and ideology.

Social Anarchism or anarcho-socialism is a broad category that distinguishes itself from individualist anarchism by favoring a communal solution to social problems and favoring a free society that protects individual liberty, contrasting the individualists emphasazing personal autonomy and the rational nature of human beings. Of the two, social anarchism was the most popular and widespread category of classical anarchism.[57]