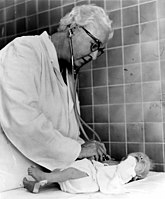 Virginia Apgar M.D (June 7, 1909–August 7, 1974) was an American obstetrical anesthesiologist, zoologist, medical researcher, surgeon, and amateur violinist. She created the APGAR score, a prominent medical test, which is used to assess the health of newborn infants in order to determine if they need to immediate neonatal care. Her test remains a standard procedure and has been responsible for dramatically reducing infant mortality in the United States and around the world.[2]

Apgar was motivated to get involved in medicine for personal family reasons. Of her two older brothers, one died of tuberculosis, the other struggled with life-long health issues. While Apgar maintained that "women are liberated from the time they leave the womb," and that being female had not imposed significant limitations on her medical career she sometimes privately expressed her frustration with gender inequalities.[3]

Later, she would attend Mt. Holyoke College where she majored in zoology with minors in physiology and chemistry. Later she went to the College of Physicians and Surgeons at Columbia University graduating fourth in her class. Determined to become a surgeon, she won a surgical internship at Columbia. Despite her success, the chair of surgery, Dr. Alan Whipple, discouraged her a career in surgery given the lack of success other women faced. Whipple, recognized her talents and encouraged her to get involved in studying anesthesiology, something seen by Whipple as underdeveloped. Apgar struggled to find a training program when she completed her surgical residency in 1937. She spent six months training with Dr. Ralph Waters' department of anesthesia, the first in the United States, at the University of Wisconsin-Madison. She then spent six months with Dr. Ernest Rovenstine at Bellevue Hospital in New York.[4]

In 1938, Dr. Apgar returned to Columbia University as the director of the division of anesthesia and as an attending anesthetist. Despite her title, she had trouble recruiting physicians to work for her. Surgeons did not accept anesthesiologists as equals, and the pay for the less well-respected specialty was low. Apgar was the only staff member until the mid-1940s. By 1946, anesthesia began to become an acknowledged medical specialty with required residency training, and in 1949, when anesthesia research became an academic department, Dr. Apgar was appointed the first woman full professor at the Columbia University College of Physicians and Surgeons. She then began studying obstetrical anesthesia—the effects of anesthesia given to a mother during labor on her newborn baby—where she made her greatest contribution to the field, the Apgar Score. This was the first standardized method for evaluating the newborn's transition to life outside the womb.[4]

While working Apgar noticed a dramatic decline in 1-year infant mortality had occurred in the United States from the 1930s to the 1950s. There was, however, no change in death rates for infants within the first 24 hours of birth.

In order to protect infants, Apgar created a five part test to screen infants within one minute of birth. The child's heart rate, respiratory effort, muscle tone, reflex response, and color are all screened. After each are observed and given 0, 1, or 2 points. The points are then summed to arrive at the newborn's score. A bad score requires immediate intervention by the hospital staff. First published in 1953 the test was adopted after some initial resistance, and was eventually used throughout the world. Apgar's initial view was to have the test taken after one minute. A major innovation by other medical professionals was to take the test at both one and five minutes, something she later adopted.[4][5] This procedure greatly improved neonatal survival.

After her groundbreaking work on neonatal care, Apgar continued to work as an educator and advocate for things like universal rubella vaccination to inhibit transmission between mothers and infants at birth.[6]