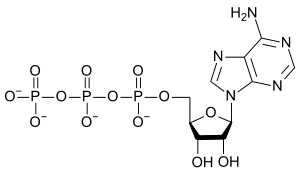 The structure of ATP, as determined by Science!

Adenosine 5'-triphosphate (ATP) is an organic compound composed of adenine, the sugar ribose, and three phosphate groups. ATP serves as the major energy source within the cell to drive a number of biological processes such as photosynthesis, muscle contraction, and the synthesis of proteins. It is broken down by hydrolysis to yield adenosine diphosphate (ADP), inorganic phosphorus, and energy. ADP can be further broken down to yield adenosine monophosphate (AMP), additional phosphorus, and more energy. When the phosphorus and energy are immediately used to drive other reactions, such as the synthesis of uridine diphosphate (UDP), an RNA precursor, from uridine monophosphate (UMP), the pair of reactions are said to be coupled. New ATP is produced from AMP using the energy released from the breakdown of fuel molecules, such as fats and sugars.

Extracellularly, ATP has been found to act as a neurotransmitter. ATP receptors are widespread through the body. Often released in tandem with other neurotransmitters, by itself ATP is known to have effects in the arteries, intestines, lungs, and bladder.

Adenosine Monophosphate (AMP), which is ATP with two of the phosphate groups removed, is also known as the "A nucleotide" in DNA.