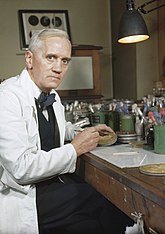 Fleming at a lab bench

Sir Alexander Fleming (6 August 1881–11 March 1955) was a Scottish physician, biologist, microbiologist, and pharmacologist. In 1928 he accidentally discovered the world's first antibiotic substance benzylpenicillin (Penicillin G) for which he would later win the 1945 Nobel Prize. Prior to the discovery of antibiotics, fairly simple cuts and gashes could be lethal if they became infected.[1]

Fleming attended Louden Moor School, Darvel School, and Kilmarnock Academy before moving to London where he attended the Polytechnic. He spent four years in a shipping office before entering St. Mary’s Medical School, London University. He qualified with distinction in 1906 and began research at St. Mary's under Sir Almroth Wright, a pioneer in vaccine therapy. He gained M.B., B.S., (London), with Gold Medal in 1908, and became a lecturer at St. Mary's until 1914.[2] Additionally, he had served in the London Scottish Regiment's Volunteer Force starting in 1900 and was also a member of the St. Mary's rifle club.[3]

He served throughout World War I as a captain in the Army Medical Corps and witnessed the overuse of antiseptics on wounded soldiers. Fleming found that antiseptics failed to protect soldiers from sepsis and that the cure was generally worse than the infection itself. This would help begin Fleming's study of finding ways to treat bacterial infections.

Somewhat messy in his research practices, Fleming left several cultures in his laboratory unattended while out on vacation after spending some time studying staphylococci (a bacteria known for causing a variety of illnesses in humans). Upon returning one culture left near a window had produced a mold which appeared to have killed all the staphylococci in the dish around it.[4][5] The mold was identified to be of the genus Penicillium and Fleming found it effective in combating a number of harmful bacteria. Fleming quickly discovered that bacteria could develop resistance to the penicillin if improperly administered, thus nullifying its impact. Fleming and a team of young recruits were unable to purify or properly stabilize penicillin. A team of Oxford scientists were later able to do just that around World War II.[6] The first of many patients to ever receive antibiotics was one Anne Miller in 1942. She passed away in 1999, aged 90.[7] For his pioneering role in discovering penicillin and identifying its medicinal potential, Fleming would later share the 1945 Nobel in Physiology or Medicine with Howard Florey and Ernst Boris Chain.[8]