Barrie in an interview

Barrie Trower is a pseudoscientist, conspiracy theorist, and crank who believes that microwaves and related technologies are a major threat to public health. He is frequently cited by other conspiracy theorists and cranks, especially the paranoid crowd that believes that electromagnetic radiation is part of various nefarious plots against humanity.

Trower allegedly trained in the British "Government Microwave Warfare Establishment" in the 1960s and worked with the underwater bomb disposal unit.[2] He hasn't given any concrete evidence to support his apparent training and work. He also claims that after this he "went on to teach advanced physics and mathematics at South Dartmoor College", which in practice means he was a high school teacher, as South Dartmoor College

is a secondary school in Ashburton, Devon, England. Perhaps he wants you to think it's a research university.[3]

Trower claims that WiFi is the devil uses "the same frequencies and powers as microwave stealth warfare weapons",[4] which doesn't sound so scary if you know the properties of microwaves. In addition, he claims to be some sort of scientific prophet because he thinks that he predicted police officers and civilians becoming ill because of TETRA's (Terrestrial Trunked Radio's) microwaves.[5] According to his revelations, if microwaves were honestly that harmful we would, by now, have many cases of people becoming seriously ill from the dreaded fiend in disguise the sheeple know as Wi-Fi… Remember to buy a packet of tinfoil hats for the entire family, the man in the straitjacket said so!

In 2001, Trower presented his theories at the Devon and Cornwall branch of the Police Federation. The subject of his talk was the supposed dangers of the Terrestrial Trunked Radio

(TETRA) mobile radio communications system deployed for use by police officers in the UK. This resulted in a screed entitled "Confidential Report on TETRA Strictly for the Police Federation of England and Wales," where Trower outlines a massive conspiracy theory asserting that the dangers of microwave radiation on the health of the populace is intentionally supressed by the telecommunciations industry. He backs up this claim using a variety of sources, including anecdotal evidence related to the global weapons industry. To elevate the fear factor, Trower mentions clandestine CIA and USSR projects, and, of course, the High Frequency Active Auroral Research Program (HAARP). Despite claims that the report was released for peer review,[7] there is no evidence that this ever happened.

In 2004, a UK police officer, convinced that the TETRA system was making him ill, died of cancer. This event revitalized protests against the radio system that many claim "cause headaches, sickness, disturbed sleep and skin rashes".[8] Several government and academic sources reported that the radio communications system was unlikely to pose a hazard to health. Despite this, Trower published a report claiming that these reports were "both incorrect and ignorant of peer reviewed published research."[9] Trower cites a number of anecdotal sources, unscientific studies, and uncited academic sources to back up his claims. The report concludes that the government is either ignorant or deliberately malicious with respect to the hazards of microwave radiation. 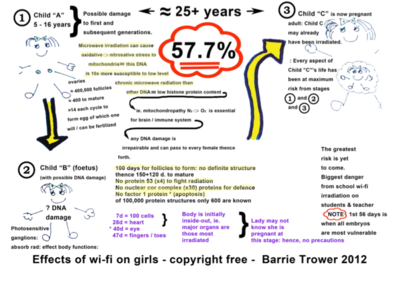 Trower's unintentionally hilarious infographic on the dangers of microwave radiation to the female reproductive system.[10]

Trower is completely unknown in academia. He has neither authored any serious academic works nor have any of his "reports" ever been evaluated or cited by any reputable academic entity. Despite this, the pseudoscientific veneer of Trower's claims have elevated him to minor celebrity status in the clogosphere. Dozens of webshites cite Trower as a source, inflating his negligible qualifications and presenting him as an authority on electromagnetic radiation and health.[11]

This behavior is completely expected, and is an excellent example of crank magnetism. Trower's claims are always presented in a sensationalist fashion, mixing dozens of seemingly questionable sources with an obligatory distrust of government and industry.[9] Mainstream media has occasionally been suckered into presenting Trower as a legitimate scientist. For example, in a article about the safety of wireless networks in Canadian schools, the Montreal Gazette failed their fact checking by presenting Trower as a "British scientist and former naval microwave weapons expert" despite the fact that only source for this claim is Trower himself.[12] Similarly, Canada's National Post ran a sensationalist article about the dangers of WiFi using Trower's inflated credentials.[13]

Trower is not above using fraudulent sources to back up his claims. He backs up his contention that cellular telephone radiation causes DNA damage using university studies that were found to be fabricated.[14][15]