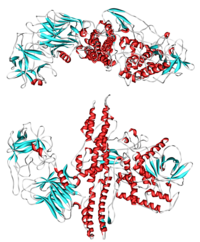 Botox is the brand name of a medicine containing Botulinum Toxin. It has a few niche uses in medicine, but it is most widely known for its cosmetic uses and spoiling canned food.

The bacterium Clostridium botulinum survives by breaking down and consuming dead flesh, such as deli meats. The name itself derives from the Latin botulus, meaning "sausage". One of the metabolites of C. botulinum is a particularly powerful neurotoxin, botulinum toxin, and even a miniscule amount will inhibit the release of acetylcho-somethingorother, effectively preventing your muscles from moving. The paralysis is bad enough, but remember, this includes both your heart and diaphragm, and the victim suffocates. Just how tiny an amount is necessary to kill a human? About 70 nanograms for a typical human. For reference, that is well over a million times deadlier than cyanide. And the toxin is 100% naturally occurring, and organic to boot.

This is why all deli meats contain preservatives. Even the organic stuff will include nitrates in the form of "celery juice extract".

There are a few times when a muscle needs to be paralyzed for an extended period of time. In this case, an incredibly minuscule amount of Botox is injected into the muscle, holding it still. It is one of the available options for dystonia treatment, although it only has a temporary effect and some people develop resistance to it. As there are two types of Botox, someone who is immune to one type will frequently respond to the other.

One of the side effects of its therapeutic effect is that in the case of facial muscles, the lack of an ability to move means that wrinkles are slower to form. So of course it has found use by people looking to reduce the appearance of aging; in 2012, over 6 million Botox injections were performed in the US, making it by far the most common cosmetic procedure.[1] Business can be good selling botox injections, while self-esteems remain damaged.

So why does Botox deserve our attention? Well, a number of infamous celebrities such as Jenny McCarthy regularly complain about alleged toxins in vaccines while at the same time using Botox regularly.[2]

Botulinum toxin is an occasional source of speculation due to its potency and relative availability: C. botulinum is by no means a hard creature to come across; it is found worldwide and, in fact, its spores are probably in the dirt under your feet.[3] It's mostly a problem when bacteria grow out of the spores and produce the neurotoxin.