I’ve been away for a month’s enforced holiday, banned because of a jokey remark that was intended as a helpful comment but was mistaken for I-know-not-what. It’s clear that those in charge of this website have no sense of humour. And indeed no sense of anything much except their own self-importance. I don’t know if you are aware of your own ignorance and bullying and pig-headedness. I still can’t work out if the sysops here are genuinely stupid, or if most of you are parodists, or if you just enjoy throwing your weight around at the expense of others, and have hit upon Conservapedia as the ideal outlet for such behaviour. But at least the month away has given me time to consider, and time to realise that any participation here is a total waste of time. I’ve had enough. I’m off. So long. Goodbye.

I tried to contribute. I tried to make a difference, in my small way. I tried to inject a little common sense and help the project by challenging some of the more extreme examples of blinkered and ignorant bias, with the aim of achieving a bit more balance, and a few slightly more accurate articles. But those in charge are incapable of engaging in rational argument. Any questioning of the party line, any attempt to improve an article by making it less egregiously biased and plain stupid (see, e.g., cp:Professor values, cp:Deceit, cp:Hollywood values, cp:Mystery:Young Hollywood Breast Cancer Victims, etc., etc.) is interpreted as an assault and an example of “liberal” deceit/bias/obsession/whatever. That’s what makes Conservapedia so different from Wikipedia. There, a challenge (“prove it!”) is accepted in good faith, and more often than not results in a fruitful discussion and improvement of the article. Here, such a challenge is seen merely as an attack. Again, I don’t know if you are too stupid to realise that it’s useful to have your assumptions and prejudices challenged from time to time, or if you calculate that there is some gain to be made from outright rejection of any questioning. Either way, the result is that it’s impossible to help you out of your ignorant, biased, blinkered quagmire.

Furthermore, the atmosphere here is poisonous. It’s like the worst totalitarian regime, a one-party state that will not tolerate any dissent. The anti-intellectual atmosphere is reminiscent of the Chinese cp:Cultural Revolution. Anyone who actually knows anything about a topic is treated with suspicion, ridicule and a ban. Articles are summarily deleted because a sysop doesn’t understand the topic. Attempts to explain (e.g. the difference between rugby union and rugby league) are rejected and interpreted as personal attacks. Meanwhile, articles on non-controversial topics are in many cases just plain rubbish. Look at cp:cricket (game), or cp:York. Or a hundred others. What of the “trustworthy encyclopedia”? You don’t care, I guess. There is nothing trustworthy here, and not much of an encyclopedia either. Conservapedia is in reality a parody of an encyclopedia. There is little enough regard for accuracy in the non-controversial articles – and the same principle applies in the articles on politics, biology, homosexuality, atheism, whatever the current obsession of Aschlafly and his acolytes. Where Wikipedia strives (however imperfectly) for accuracy and truth, all that matters here is to plug the most extreme right-wing nonsense. You ride roughshod over the truth in these controversial articles, just as you ignore the truth in the minor articles of this “encyclopedia”.

And in the bullying and belligerent attitude of the sysops it is also a parody of a wiki. Where is the collaboration? Where is the give and take that makes Wikipedia so successful? But if that’s the way you want it, so be it. It’s your website, Mr Schlafly. If you want to carry on making yourself look as stupid as possible, and if your acolytes want to continue supporting you in writing your encyclopedia wiki blog, that’s fine by me. The recent Lenski farce was a prime example of insistence on looking stupid in public. You’re welcome. You won’t be seeing me around here any more. There is no need to ban me (and I dare you to resist the urge). I’ll not be back. So long, you poor ignorant, clueless, paranoid people. Godspeed. 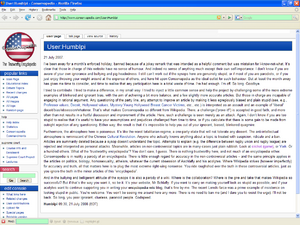 I bet you say that to all the poor, ignorant, clueless, paranoid people!
Retrieved from "https://rationalwiki.org/w/index.php?title=Conservapedia:Parthian_shot/Humblpi&oldid=1615506"
Categories: