A brief history of RationalWiki

Once upon a time, as many such stories begin, began the history of RationalWiki. Then ye shall see the story upon this tapestry woven for your enjoyment.

RationalWiki 1.0, or RW 1.0, was founded by ColinR in March 2007 (as a result of this comment?) in a disgusted reaction to the foolishness evidenced at Conservapedia (CP). Over the next couple of months, editors at CP who were suspected of "sanity" were carefully invited via email to come join the site.

It was a combination of people writing articles on topics they were frustrated by CP over, and a lot of random letting off of steam over the stupidity we were encountering over there. Articles and talk pages intermingled, and there were no rules.

Many users used it as a forum to discuss ways of improving the scientific content at Conservapedia.

The last 48 hours or so of RW 1.0 were a vandalism festival, with people randomly wrecking articles, user pages, and, especially, the main page, prior to the Big Wipe.

On May 16 and 17, 2007, now known as the Night of the Blunt Knives, every CP editor who was identifiable as a contributor to RationalWiki was perma-banned. Colin and Trent decided to wipe the wiki, mess that it was, and on May 22 started "RationalWiki 2.0", which you see before you now.

Most of us saved off-site copies of our user pages, and our pet articles.

RW 2.0 got up and running quite rapidly, although for a few days most of what we created were userboxes. A glamorous and sophisticated main page was built, and "community standards" were worked out by the mob. Shortly thereafter we wrote our mission statement, which now graces the aforementioned glamorous main page. 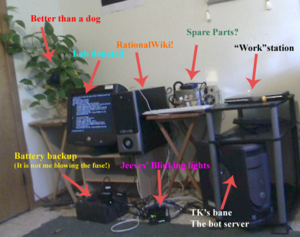 RationalWiki in its physical form prior to November 14, 2010.

Technically it became RationalWiki 2.1 on Sep. 10 2007, our "host", Siteground, blocked our access claiming we were using "too much shared server time". Apparently their business model is to attack any successful sites they host and blackmail them for $90/month (fifteen times the prepaid rate) for so-called "Virtual Private Server" service. We aren't that dumb, so within 24 hours Trent had moved the site to a new host.

RationalWiki 2.1 saw the introduction of many innovative extensions:

Things also devolved in the egalitarian management of user rights even further:

On January 6-7 2009, roughly from 6 PM to about 1 AM (EST), Conservapedia lost their spellchecker while RationalWiki was moved to a shiny, happy new server, next to Trent's pot plant.

We upgraded our mashed potatoes in the afternoon of April 24, 2009 (EST) to the (then) latest version of MediaWiki. Thanks to Nx's prepreparationism, our "special" extensions survived - and improved. Viva la evolucion!

From August 19 to September 6 2009, RationalWiki went to the seaside.

We replaced our old copyleft licensed logo in November 2009 with a copyrighted one in order to gain more control over our brand. 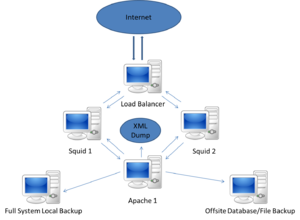 RationalWiki took steps in 2010 to move beyond the ad hoc nature of its previous existence. In the summer of 2010, The RationalWiki Foundation Inc. (now the RationalMedia Foundation) was incorporated as a non-profit to manage the affairs of the wiki and any other projects. Ownership of the logo, domain name(s), and server hardware was transferred from the founder to the Foundation.

An election to add three Trustees to the two appointed to bootstrap the Foundation took place over December 2010 and January 2011.

RationalWiki moved from its home in Trent's home to commercial hosting on November 14 2010. The move also included an upgrade to the most recent version of the MediaWiki software, changing the default skin from Monobook to Vector.

After the server had died under load a few times, in October 2012 we put together a slightly more elaborate server farm. This serves the various RWF sites with marvellous speed and beauty and hardly dies nearly as often, maybe.

A much longer history of RationalWiki

The following is a timeline of major events in the history of RationalWiki.

The history of RationalWiki is shrouded in mystery at this point. 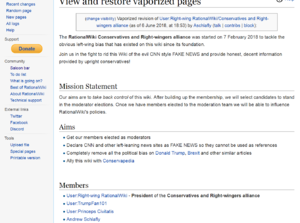 President of the Conservatives and Right-wingers alliance