From RationalWiki
Jump to: navigation, search
This page is automatically archived by Archiver
Archives for this talk page: <1>

Just noted four of Andy’s gems, all from http://www.conservapedia.com/Talk:Essay:Best_New_Conservative_Words/archive2, in which he explicitly admits that he is skewing his own sample:

a) “Superb suggestion [Scrooge]. Please add with a precise date, if you have one. I'm also working on a few possibilities for 1700s and 1800s to perfect the geometric fit, but yours is better than mine.--Andy Schlafly 12:15, 14 May 2009 (EDT)” Note the uncommon modesty.

c) “Thanks for the insights above. Looks like we'll hold off on both terms, then. That means we're still looking for one more word from the 1700s to perfect the geometric increase in generation of insightful conservative terms for the list. Suggestions are welcome!--Andy Schlafly 14:21, 19 May 2009 (EDT)”

This is a good article. Should it join the elite at category:Best of Conservapedia? Totnesmartin (talk) 15:33, 27 October 2010 (UTC)

it's a good article overall, but the huge text blocks for footnotes are... problematic, in my opinion. Perhaps you could create some kind of references page and just link to that in the footnotes. MDB (talk) 11:01, 28 October 2010 (UTC)

The huge footnotes list the essays for the count mentioned in the opening paragraph, and I think these numbers are outdated anyway, given Ken's recent enthusiasm for essay-spamming. We could preserve them in an article about CP's essays, but updating them would require a manual search and count of CP's mainspace for articles with "essay" in the title, a description has lost most of its meaning anyway...I don't know if it's worth the effort. Röstigraben (talk) 11:13, 28 October 2010 (UTC)

The section on essays is a distraction - and outdated. If there is any interest in the information provided within, then I could put an updated version elsewhere
For instance, Conservapedia's greatest essayists are at the moment:

I took out the following: 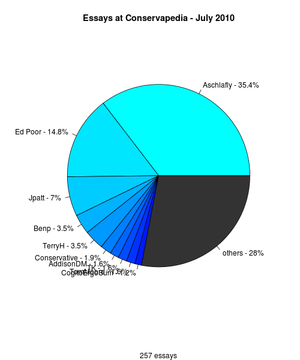 Conservapedia - unlike RationalWiki - has no separate namespace for essays. Instead, an essay is just an article prefixed by essay:. In July 2010, there existed over 250 such essays at Conservapedia. More than a third (91) were penned by Andrew Schlafly himself as a way to present us with his wonderful insights [1] - Ed Poor being a distant second with just 38 essays[2]. Generally, one would expect such an essay to be the work of a single author, but at Conservapedia, this isn't always the case: instead, Andrew Schlafly often asks editors to add to his essays. larronsicut fur in nocte 11:42, 28 October 2010 (UTC)

I agree with the removal of first-person perspectives, but LArron and Opcn did the number-crunching and analysis for this one, so they should be credited somewhere. Röstigraben (talk) 12:30, 28 October 2010 (UTC)

Assfly claims that society is becoming less well-educated and yet he claims that Conservative words are increasing so hasn't he unintentionally suggested a correlation between conservatism and lack of education? --Let Them Eat Cake (talk) 16:34, 19 December 2012 (UTC)
Retrieved from "https://rationalwiki.org/w/index.php?title=Conservapedia_talk:Best_New_Conservative_Words&oldid=1665740"
Category: