Daniel De Leon was a radical American union organizer, socialist theoretician, academic, and politician. He founded a branch of Socialist theory called "De Leonism", which is considered very similar to some forms of anarcho-syndicalism,[note 1] wherein the workers' organizations (the labor unions) are the supreme legal force and which considers the credible threat of violence to be integral to labor organization. 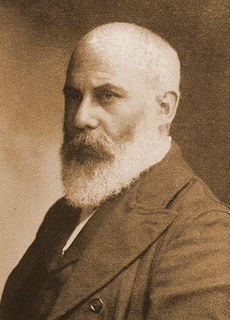 De Leon was born on December 14, 1852, in Curaçao. He was the son of Saloman and Sarah De Leon. His family were Dutch Jews, and his father was a military officer. Saloman died when Daniel was 12, and 1 year later, Daniel left for Hamburg, Germany. He studied at the Gymnasium there for a time before attending the University of Leiden in the Netherlands. He did not graduate. In 1873, he emigrated to New York, entered Columbia University, and eventually earned an LLB. He had a legal firm for some time in Brownsville, Texas, before eventually becoming a lecturer at his alma mater. His lectures mostly involved South and Central America and the history of western intervention in these regions.

This was very controversial, and De Leon was fired in 1889. In 1891, after finding himself in Kansas with a canceled speaking engagement, he was hosted by Bertha Canary, whom he eventually married. They had 5 children, the youngest of whom, Genseric, was named after a Gothic leader who forced the pope to kiss his toes.

De Leon became a Socialist in 1886, after first supporting the Mayoral campaign of Henry George, and joined the Socialist Labor Party in 1890, becoming editor of its newspaper. In 1891, 1902, and 1904, he ran for mayor of New York, with his best result coming in 1902.

De Leon was a revolutionary socialist and tried to sway the SLP away from Democratic Socialism. He was very critical of craft unionism, referring to the American Federation of Labor as the "American Separation of Labor" and favored not just a one big union concept but rather a concept of international labor unionism. He founded the Socialist Trade and Labor Alliance, which tried (largely unsuccessfully) to form international solidarity with other labor unions.

In 1905, along with Eugene V. Debs and Big Bill Haywood, De Leon founded the Industrial Workers of the World (IWW or Wobblies), which would briefly become the largest and most influential union in America. However, he later accused the IWW of being taken over by "the bummery" and argued for political action, while Haywood argued for aggressive direct action. De Leon was expelled for referring to IWW members as "slum proletarians". He founded the Detroit-IWW, which would eventually be named the Workers' International Industrial Union in 1915, and which collapsed in 1925.

De Leon died in New York on May 11, 1914. The Socialist Labor Party remained influential for many years and still exists (though dormant since 2008) (All 77 members!).[1] They hold the distinction of being America's second-oldest "third party" after the Prohibition Party, and the SLP and Prohibition indeed have a lot of similarities, including a long-running poor showing on the ballot and most of their remaining membership being octogenarians.