Industrial Workers of the World

Industrial Workers of the World Universal Label circa 1917

The Industrial Workers of the World (IWW), nicknamed the Wobblies, is a radical trade union, founded according to the model of "One Big Union" for all workers. It really lives up to that claim too especially as it has been one of the longest running joint ventures between proponents of communism, socialism and anarchism.

Although it once had several hundred thousand members, it now boasts a grand total of 13,000, around 3,000 of whom are actually active in the union on a regular basis. The IWW had a great deal of influence on the early development of the American labor movement and introduced a number of novel ideas to organized labor, like gender and racial equality — enabling women, African Americans, and people of color to hold positions of great power and influence within the union.

The name of the IWW is not, not, not, the "International Workers of the World," despite their misidentification as such in many history books and encyclopedias.

Although the IWW is not officially anarcho-syndicalist (the chicken-and-egg argument kicks in here as to whether the IWW serendipitously started out as inherently syndicalist without knowing it or if the founders were more influenced by European writers than they had let on), anarcho-syndicalism is the dominant ideology within the union. Its stated goals are for all workers to be organized into "One Big Union", in preparation for a general strike that would result in the abolition of the wage system, and in workers taking over their workplaces according to the "Wobbly Shop" model of "worker self-management",

without bosses or capitalism.

Rage Against the Machine guitarist Tom Morello, and Earth First! activist Judi Bari, who attempted in the 1990s to build an alliance between timber workers and environmentalists and was almost murdered for her efforts. Deceased anthropologist David Graeber was a Wobbly anarchist professor, something to the chagrin of both the Anarcho-Capitalists and Yale, who fired him for not shutting up about worker rights in the infamously low-income New Haven community surrounding the snottiest university in New England (except for maybe Harvard, but nobody outside either of those parts of the Ivy bubble cares).

The IWW was founded in the United States in 1905. Many unionists and socialist leaders of the time felt there was a need for an alternative to the conservative craft unions of the American Federation of Labor, which, they believed, created divisions among workers that should be united in a common cause, including radical ideas about integration.

(yes, like the magazine), Eugene Debs, and Daniel De Leon. The first big split in the IWW came in 1908 with the departure of Daniel De Leon, the leader of the Socialist Labor Party and the namesake of the "De Leonist" school of Marxism. De Leon had wanted the IWW to support the Socialist Labor Party in politics in addition to organizing in workplaces and using direct action, a strategy that was rejected at the union's 1908 convention. De Leon briefly formed a rival IWW, which eventually became the Workers International Industrial Union and ceased to exist entirely by 1924.

During the IWW's heyday (roughly 1908 until the U.S. government suppressed it during World War I) it chalked up particular successes in organizing workers in jobs which until then had been shut out from the established unions: textile workers on the East Coast, and migratory agricultural workers, loggers, hard-rock miners, and others in the Midwestern and Western states. The Wobblies also, unlike most other unions at that time, admitted African Americans, women, and immigrants into their ranks.

Because of its association with migratory workers, who often traveled by hitching rides on trains, IWW culture and hobo culture became closely associated.

The IWW became associated with many labor songs, many of them written by Joe Hill, who became the IWW's most famous martyr when the state of Utah executed him in 1915. During that time, the IWW was known for its "free-speech fights" — local authorities in several cities attempted to prevent IWW organizers from giving soapbox speeches in public, which led to mass arrests as IWW members poured into those cities to challenge those laws. During those free-speech fights, the Salvation Army's bands would often attempt to drown out IWW speakers by playing Christian hymns; this prompted Joe Hill to write a song, "The Preacher and the Slave", that parodied evangelists and attacked the group as the "Starvation Army".

The IWW opposed U.S. entry into World War I and as a result was targeted for repression, which included the tarring and feathering of IWW members by Ku Klux Klan factions, the formation of rival "patriotic" company unions such as the Loyal Legion of Loggers and Lumbermen or "Four-L". The 1919-1920 Palmer Raids, aimed at the deportation of foreign anarchists and other radicals, saw several IWW leaders indicted, arrested, or forced into exile from the U.S.

Around that time some IWW leaders, inspired by the Bolshevik Revolution of 1917, switched their allegiance to communism and the new U.S. Communist Party (founded in 1919), leaving what was left of the IWW increasingly influenced by anarcho-syndicalism.

Despite the government repression and the luring of several leaders away from the IWW into the Communist Party, the IWW rebounded and grew quickly again during the early 1920s, but a major split in 1924 between two different conceptions of anarchism again decimated the IWW.

The much-reduced IWW still remained a potent force in several industries in the 1930s and 1940s, but its influence was steadily eroded by government suppression, union-busting efforts, and the deliberate poaching of its membership by other unions. The defection of the Ohio steelworkers to the AFL-CIO in the mid-1950s marked the loss of the IWW's final major stronghold and most of its remaining membership; this effectively marked the end of the IWW as a notable player in the American labor scene until the 1980s, although the union continued to exist and maintained a small number of organized shops.

The IWW limped along in near-total obscurity for much of the 20th century; in 1970 the IWW had fewer than a hundred members, most of them in Chicago and almost all of them extremely elderly individuals left over from the organization's 1920s heydey. However, the organization experienced a slow rebirth beginning in the 1980s, and now has approximately 13,000 members recently initiated worldwide, with ~3,500 of those members active and in good standing as of 2015; most of them are in the United States, Canada, and the United Kingdom, although there are organized IWW branches in several other countries. While it is a pale shadow of what it once was and has negligible influence on the labor movement, the union is far from dead. 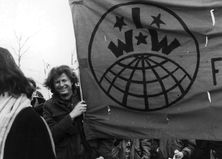 IWW in Washington D.C. following the US invasion of Iraq

The IWW continues to organize today, albeit on a much reduced scale. One notable action was its attempt to organize food workers at Jimmy John's sandwich franchises in Minneapolis. One of their grievances was that Jimmy John's forced its workers to come to work and handle food even when they were sick.

When it came to a vote, the workers voted down IWW representation by a narrow margin; but there were some allegations of intimidation on the part of the owners, and the NLRB nullified the election results.[2] Before any further action could be taken, the franchise owners very suddenly fired all the IWW organizers, on the grounds that they had distributed propaganda posters calling attention to the lack of paid sick leave.[3] These firings were ruled illegal by a federal court in 2012.[4]

The union had some success organizing miners in Sierra Leone during the 1990s; the Sierra Leone chapter of the IWW had several thousand active members in 1997, and was the union's most active chapter for a brief period. However, the outbreak of civil war effectively destroyed the Sierra Leone IWW, with many high-profile members of the union dying or disappearing and most of the rest drifting away; the IWW is now effectively nonexistent in the country.

The IWW has worker-owned and self-managed cooperative restaurant and printing job shops. It has contracts with office, not-for-profit, and recycling workers and has recently won union recognition elections in the rail and call center industries.

One of the ways that the IWW differs from other unions is that the management of any particular job branch, or chapter, is left in the hands of the members of that chapter. So for example, contract negotiations with management are all done by the workers themselves rather than by "professional" union officials from elsewhere. This is one of the strong selling points of the union for workers who want to control their own destiny but is also somewhat of a burden on the members involved.

As of 2018, the IWW is currently organizing workers at Burgervilles across America[5] and fighting for better wages and working condition there. This is the very first unionized workplace in the fast food industry, which is a remarkable achievement considering how many thought the fast food industry to be an impossible place for unions due to the high turnover rate. They also are one of the few unions who have high quality dunks on Twitter.[6] The IWW is also organizing couriers across Europe, and are actively organizing incarcerated workers and fighting against prison slavery.[7] They have also joined the International Confederation of Labor,[8] an international organization of revolutionary unions.