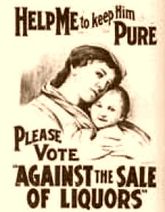 Won't somebody PLEASE think of the children's precious body fluids?!

The Prohibition Party is America's Oldest Third Party™. It was founded in 1869, and as the name implies, they have but one overriding issue: prohibition of alcohol. While the party has never had much electoral success, alcohol was indeed briefly prohibited from 1920 to 1933. Still, since its repeal, prohibition has become a minority interest, and the party has declined into obscurity.

The party was founded upon Christian principles. Historically (in the 1800s, at least), the party had an admixture of socialist, pacifist, and feminist crusaders mixed in with the usual fundamentalist Protestant crusaders. In recent times, the platforms of the party and the candidates have varied alot and have included progressive, centrist, moderate conservative and far-right platforms, all united by a hatred of alcohol. Their current platform (2022) is center-left to left-wing on economic issues, and moderately conservative on social issues. Their current platform is opposed, in addition to alcohol, to abortion, the death penalty, and gambling, and calls for a constitutional Amendment to ban the concept of legal marriage but allow any two individuals (regardless of sex) to enter a civil union. [1]

In the 1930s in New York State, they were known as the Law Preservation Party because they sought to keep the Prohibition law then in place, and everybody likes to preserve laws.[3]

In keeping with the tradition of U.S. political parties using donkeys, elephants, black panthers, and porcupines as mascots, the mascot of the Prohibition Party is the camel. Camels don't drink very much.[note 1] They did later change the logo to a different version to avoid the appearance of being associated with Camel cigarettes.[4]

Interestingly, in 1887, the Prohibition Party became the first ever political party to elect a female mayor in the United States, with the victory of Susanna Madora Salter (née Kinsey), who served as the mayor of Argonia, Kansas for one year.

"Drop the bass"? Sure thing, sonny — just let me get the tuba!

The Prohibition Party has stood as a candidate in every presidential election since 1872.[5] That year, James Black, one of the party's founders, received a mighty 2,100 votes. They gained popularity through the late 19th century, with the improbably-named John St. John, a former Republican governor of Kansas, getting 147,520 votes (about 1.5%) in 1884, coming fourth behind the United States Greenback Party.[6] They received their highest number of votes (270,770) and greatest share (2.3%) in 1892, when John Bidwell, a veteran of the Mexican-American War, wagon train pioneer, and founder of the city of Chico, California, came fourth in the popular vote. However, he gained no electoral college votes.[7]

While only able even in their heyday to elect one California congressman and one Florida governor (Charles H. Randall for California's 9th district and former Democrat Sidney J. Catts, respectively), big-P Prohibition spread as a holy cause among both major parties and became policy in 1919 with the passage of the 18th Amendment to the United States Constitution largely without their help. In the early years of the 20th century, they had modest success as a third party, most notably their 1904 candidate, the alliterative Silas C. Swallow, a Methodist preacher and earlier a campaigning abolitionist, who received 258,596 votes.[8] After the passage of the 18th Amendment and its subsequent repeal, the Prohibition Party faded into obscurity and has been on life support ever since.

In 1928 they considered throwing their support behind prohibitionist Republican candidate Herbert Hoover, but instead picked William F. Varney (20,095 votes; 0.05% share; 0 electoral college votes), who later stood unsuccessfully on the pro-Volstead act Law Preservation Party ticket for Governor of New York State. In 1932, former Democrat Congressman William David Upshaw came fifth in the popular vote behind Socialist and Communist candidates; their 1940 candidate was Roger Babson, a successful investor and educationalist, co-inventor of the parking meter, and funder of research into gravitational shielding.[9] In 1952, they enlisted singing cowboy Stuart Hamblen, composer of the popular hit "This Ole House", but even he was unable to fix the shingles and mend the floors of the Prohibitionist movement.[10]

Earl Dodge, also an anti-abortion campaigner and collector and manufacturer of political memorabilia, stood for president five times from 1984 to 2000.[11] For the 2004 Presidential campaign they split into two factions, one supporting perennial candidate Earl Dodge, the other supporting Gene Amondson. Their 2008 presidential candidate was Gene Amondson, who was on the ballot only in Colorado, Florida, and Louisiana and got 643 votes, their second-worst showing ever. Earl Dodge died in 2007[12] and Gene Amondson died in 2009.[13]

Their 2012 nominee was Lowell "Jack" Fellure,[14] an Independent Baptist and dominionist New World Order believer who claimed that the King James Bible was his "electoral platform" and the "supreme constitution". He had previously ran seven times under the Republican Party, gaining almost extremely few to no votes each time. His platform was very authoritarian, and he didn't just want a prohibition on alcohol, but also on homosexuality. He was also against prisoner rehabilitation, freedom of speech (and he called the ACLU anti-American), and wanted the US to leave the United Nations and wanted the Bible to be taught in public schools. [15] Basically, the Constitution Party but also against alcohol. However, Fellure's national total of 518 votes (dead last overall, and the worst preforming nominee in the parties history) [16] suggests any divine assistance was meager at best.

For the 2016 presidential campaign, they chose speleologist and tuba player James "Jim" Hedges, who had lost in the 2012 primaries to Jack Fellure. He is already the first Prohibitionist to win a popular vote since 1959, being elected as Tax Assessor in Thompson Township, Pennsylvania, in 2001.[17] Instead of a regular convention for the nomination, it was conducted via a two-hour telephone conference call.[18] James Hedges received 5509 votes in the 2016 election[19] — allegedly the largest result for a Prohibition Party presidential candidate since 1988.[20] He was far more left-leaning than Fellure and was not a member of any religious organization, and despite his opposition to alcohol, he said he did not care if people smoked marijuana.