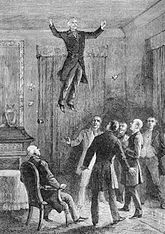 Fanboy artists of the 1800s helped spread the rumor Home was capable of levitation.

Daniel Dunglas Home (1833-1886) was a Scottish spiritualist medium who was exposed as a fraud.

Spiritualists have claimed in their publications that Home was never caught in fraud. This is completely false. Psychologist Andrew Neher has written that Home was detected in fraud by at least four people on different occasions.[1] The following is a list of these exposures: