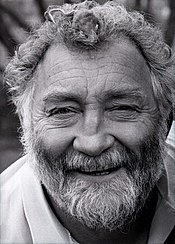 Perhaps most notable as an enthusiastic and popular, though hard-to-comprehend and over-simplistic, television presenter of ecology and botany programmes, over the years, Bellamy appeared to lose his marbles in later life and moved completely into the climate change denial camp. From there, he repeated the usual cut-and-paste climate denial bullshit about corruption in scientific institutions. He also claimed that the BBC ostracised him because of his views[1].

Bellamy retired from the climate change debate after he was ripped to pieces by George Monbiot on TV over an article that he wrote in the New Scientist[2][3][4]. In that article, Bellamy claimed that a large percentage (555 of the 625) of the world's glaciers were actually advancing rather than retreating, when in fact the opposite is happening. Bellamy's supporters claimed it was a slip of the finger on the keyboard; in reality, it appears he lifted the statistic from rent-a-scientist Fred Singer's website. However, where Singer lifted that number from remains unclear.