The British Broadcasting Corporation (BBC) is the world's largest broadcasting corporation by both audience numbers and employees. Founded in 1922 as the British Broadcasting Company, it was nationalised in 1927 and turned into the public-owned, yet independent, corporation which exists today. Producing television and radio programmes for its dozens of television channels and radio stations, it also sells books, CDs and DVDs related to the programmes. The BBC Website and the BBC iPlayer[1] represent two of the UK's biggest online services, providing news and stories and catch-up TV respectively. The BBC is often referred to as "The Beeb" or "Auntie."

It has no commercial breaks; instead, UK residents have to pay a license fee to access its channels. There are only advertisements for merchandise related to the show just broadcast, and, on television, they only appear at the beginning and end of programmes, never in the middle. Contrast this to television 'cross the pond, where it was decided that every kids' programme should be interrupted twice in a half hour in addition to between shows, and is it any wonder people have attention spans lasting shorter than... ooo, shiny!

The BBC's charter states that it must be politically neutral in its broadcasting; it maintains this neutrality by offending Conservative and Labour governments alike (that's a good thing). Over the years, the BBC has been accused of being anti-war, pro-war, left-wing, right-wing, socialist, liberal,[notes 1] and when all else fails, simply wasteful. Previously, it was extremely Anglocentric,[notes 2] although that record has improved.

As with other British television stations, its coverage of the British royal family tends towards the fawning commentary side of journalism, although the odd investigative story may turn up once in a long while. This was somewhat expected, as it was established by a royal charter. 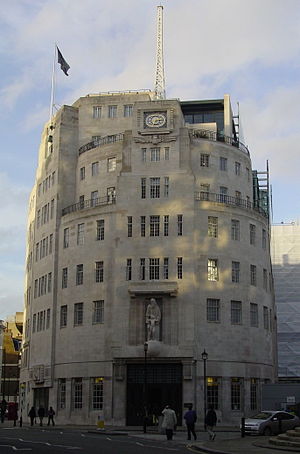 BBC Broadcasting House. Any resemblance to Breugel's Tower of Babel is purely coincidental.

The majority of the BBC's funding comes from the television licence fee. In order to legally watch or record live television programmes (by television or computer), including channels other than the BBC, a household is required to own a television licence. As of 2010, that's £145.50 (around $250 USD or 180 euro). Black and white televisions can be licensed for the reduced rate of £49. People over the age of 75 receive a free licence. The second largest source of income is through BBC Worldwide, a profit-based company which sells the BBC's content to overseas audiences.

While surveys have shown that the majority of the public are in favour of the continuation of the television licence, it is not without its controversy. Some conservatives are against a publicly-funded broadcasting service, and all of the private news providers try to gang up and accuse the BBC of... well, anything they can think of. Rupert Murdoch, for example, hates the BBC because he can't get his tentacles around it. There has also been serious criticism in recent years of the way that people are harassed concerning the licence. Broadcaster Noel Edmonds said he would begin boycotting the licence fee in September 2008:[2]

Many people in remote parts of Scotland haven't paid their licence fees in years, since it is so expensive to retrieve them. In Wales, there have historically been several boycotts due to Welsh language issues. Needless to say, Scots, Welsh and Northern Irish, not to mention the Manx, have all had issues with it.

The BBC also has substantial viewing figures in the Republic of Ireland and the Netherlands, where English is widely spoken. Of course, neither the Dutch, nor the Irish in the Republic bother to pay licence fees to the BBC, and that's the problem right there.

The BBC is usually consistently good with its science news and programming.

Pretty much all factual programmes on the BBC have now been relegated to BBC Four. The channel also provides extremely "intellectual, esoteric content," and has been parodied frequently, such as on Family Guy where they watch a show called "Condensation."[4]

Since early 2010, the BBC brought science back to its main channel with Wonders of the Solar System, followed by Wonders of the Universe (2011) and Wonders of Life (2012). These were presented by Brian Cox but were criticised for being too "dumbed down." Wonders of the Universe had its soundtrack remixed to sound less intrusive, something that Cox disagreed with, claiming that Wonders... was supposed to be like cinema and not a lecture.

Their neutrality requirements would appear to prevent them from speaking directly against homeopathy, though as Brian Cox pointed out in his (televised) Royal Television Society Lecture in 2010, this is not actually the case. In 2002 Horizon put it under a sceptical test featuring James Randi.[5] A Google search for "BBC homeopathy" will also show that their news reporting style can often put down 'homeopathic practitioners' and is generally anti-homeopathy.

The BBC is ostensibly neutral about religion, but in practice is careful not to be overly critical.

Its Sunday programming, though, usually has a strongly religious flavour. On TV there is a (usually interesting) panel programme with officials of various faiths (and frequently people of no religious faith) discussing ethics in the morning. In the evening there is the hideously dull Songs of Praise, which has been running for so long that some historians believe it may predate Christianity itself. On Radio 4, the early-morning programme Sunday discusses religious issues and is followed shortly after by The Sunday Service, a usually live broadcast from a church somewhere in the UK. Something Understood which focusses on religious, spiritual and ethical issues[notes 3] is broadcast twice on Sunday; very early in the morning and late at night. Focussing on classical music, Radio 3 will have several broadcast of sacred music; while on Radio 2, the early morning The Sunday Hour features "uplifting spiritual music" and is followed by Good Morning Sunday, described as "the weekly Radio 2 faith show." The yoof-oriented Radio 1 has no discernible religious content, unless playing godawful music counts.

Thought for the Day and Pause for Thought[edit]

See the main article on this topic: Thought for the Day

These are God-slots included in, respectively, Radio 4's flagship current affairs programme Today, and the Breakfast Show on Radio 2. Both are heavy on platitudes and tend to feature quite desperate attempts to piggyback religion onto current events with no discernible religious element. Thought for the Day in particular has attracted a lot of controversy from religious groups, non-religious groups, and various people who aren't that bothered either way about religion and just think the time could be better spent. Oddly, Pause for Thought hasn't attracted anything like as much controversy, despite being included in what is ostensibly a music programme, and having a larger audience to boot.[notes 4] Both slots use a rotation of speakers from various different religions: obviously Christians feature heavily, but Jewish, Muslim, Buddhist, Sikh and Hindu also turn up frequently. (Actually, if you listen to Pause for Thought, the sentiments aired are usually so vague and woolly, it's hard to guess which religion, if any, the speaker is from. We're not talking hardcore fundamentalism here.)

Desert Island Discs is a radio programme aired regularly on Radio 4. The show was conceived and originally hosted by Roy Plomley on 29 January, 1942 and is one of the longest running programmes on radio.

The premise of the show is that a guest is castaway on a desert island and must choose just eight recordings that they would like to listen to during their isolation. The choice of records is interspersed with a review of the castaway's life, the choice of music supposedly telling us something more of their character. At the end of the programme the guest is asked to choose one special recording that they would save should a freak wave happen to wash the collection away. In addition the castaway is asked to select a luxury item (supposedly something of no practical use for survival or escape) and a book. To preempt many people choosing either the Complete Works of Shakespeare or the Bible, and therefore give the programme more interest — these two volumes are presumed to be already present, although the Qu'ran or other holy book may be substituted by those of a non-Christian faith.

However, some non-religious guests have caused controversy by not wishing to take the Bible.

The BBC has drawn fire from social media for sharing occasional articles that give virulent transphobes (including the LGB Alliance) undue weight or not providing trans people fair balance.[13][14] One notorious article was titled "We're being pressured into sex by some trans women"

[15] which singled out trans people for "pressuring" lesbians to sex and featured Angela C. Wild from the transphobic organization "Get The L Out".[notes 5] The worst component was a contribution from Lily Cade, a notorious figure in the sex worker industry that has multiple abuse allegations. Soon after the article was published, Cade wrote a blog post[notes 6] calling for specific trans people to be lynched. After robust criticism on the article, the BBC withdrew Lily Cade's contribution,[16] though maintained its dedication to neutrality and "hearing all sides". Soon after, Mindgeek scrubbed Cade from their sites, showing that even pornographers who (allegedly) host porn made from sex traffickers[17] think Lily Cade was out of line.

Due to this, there are allegations that the BBC is transphobic, especially given that the United Kingdom has a big transphobia problem in media (see the Guardian based in the UK for example). The BBC, however, does have plenty of stories featuring trans people and their viewpoints and life experiences,[18][19][20][21] so it's more accurate to say they're so committed to neutrality they bend their backs for platforming bigots.