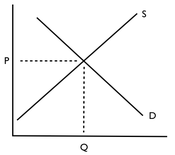 The Demand Curve is a visual representation of how much consumers will pay for some good or service in an economy based on different prices often used by economists. The demand curve slopes downward to the right, indicating that as prices fall, more quantity is sought after.[1]

Demand is usually meant as the demand curve. Where the demand curve intersects with the supply curve(equilibrium) is where the price of something is roughly determined. The terms demand and spending are sometimes used interchangeably. The year end aggregate demand in an economy can be thought of as total spending.[2] Because of the important role consumer and business spending plays in maintaining a healthy economy Keynesian economists often focus a lot on aggregate demand. A fall in demand often accompanies deflation and unemployment.