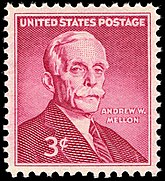 Andrew Mellon on a 1955 US postage stamp.

Andrew W. Mellon (1855–1937) was an American businessman who is best known for serving as Secretary of the Treasury under Herbert Hoover, whom he managed to terrify with his cranky economic advice. Mellon is often cited as one of the grandfathers of Reaganomics and the Laffer Curve.

He is excellent proof that being a good businessman doesn't necessarily make you a good economist.

Mellon was appointed Secretary of the Treasury by Warren G. Harding in 1921 because Mellon claimed to be a deficit hawk who would pay down the debt left over from WWI. It was at this point Mellon helped develop proto-Reaganomics, with his claims that lowering taxes (especially on the wealthy) would result in an increase of total revenue for the government, because he thought people would be more willing to pay the lowered taxes as opposed to trying to get out of it. Mellon's tax plan was fairly radical for the time:

The result of this is that by 1929 Mellon had managed to lower the top marginal tax rate to 24%, though he only got the income tax rate for the lowest income earners down to 1.5% by the same time.

When the Great Depression hit, Mellon had to clean up his mess. The lowered tax rates managed to pay down some of the public debt during a booming economy, but when this easy revenue couldn't be counted on anymore he panicked and gave Herbert Hoover his now infamous advice. He told Hoover to:

The Mellon-owned Mellon Bank was in competition with Chase National Bank, which the Rockefeller family had a controlling share in. If you're a cynic, then you might say that advice was part of the feuding between those two families.[2][3]

Hoover, thankfully, regarded Mellon's advice as insanity that would cause even more economic instability. Mellon's advice earns him a special place among some economists, who use his last name as a neologism (Mellonism) that refers to a particularly cranky, sociopathic economic theory or act.

FDR, hating Mellon, basically harassed him for the last two years of his life by having his administration accuse him of tax fraud, for which he was repeatedly taken to trial.

Despite being almost universally regarded as one of the worst, if not the worst Secretary of the Treasury, Mellon has enjoyed something of a revival among certain think tanks, from both right-wing and libertarian institutions.[4] These 'Mellonites' usually just ignore the fact that he sat through the era leading up to the Great Depression and the beginning of the depression itself. If they do acknowledge it, they will blame the 'socialist' Herbert Hoover (!) for causing the depression, or blame FDR’s New Deal for allegedly worsening the depression.

One of the more popular talking points is that the tax cuts caused the booming economy, which usually involves ignoring the actual causes of the economic boom such as the introduction of hire-purchase credit (which would later backfire), advertising, and the widespread increase of electricity which made mass production easier to pull off. Europe being in shambles after the Great War would also work to America's benefit thanks to less competition in investing.

Oh, and the similarity of this guy's name is not coincidental as he was Mellon's nephew — I guess wingnuttery runs in the family.