A portrait of Alexander Hamilton can be yours for just ten bucks.

Alexander "Grab that cash with both hands and make a stash" Hamilton (January 11, 1757–July 12, 1804) is a popular Broadway musical was an American founding father mostly known for being on the ten dollar bill and for getting into one of the last known gentlemen's duels in the United States. Other than his fetish for central banking, which are arguably unconstitutional, he did some pretty decent things as far as it relates to his being one of the core architects of the American Federalist System, which has, for the most part, been an incredibly durable system of government organization. Along with his way more liberal counterpart James Madison, Hamilton is responsible for writing the Federalist Papers. However, he proved to be a far better political theorist than he did government official.

While he did get the U.S. Treasury up and running, he was more or less what one would call a "crony capitalist", due to his love of teaming up with big business in order to manipulate the market and the rural economies. A corporatist for low regulation, and for the most part, industrialization, Hamilton believed that the cities of the East Coast deserved to have more political power than the countless agrarian communities and Frontierland[1] further to the West. Naturally, this would more or less be giving most of the influence over the electoral system to the industrialists and bankers, which already held a majority of the political influence in urban areas. So, basically, he was the original "Big Business Republican". The guy was basically an aristocratic narcissist, who sold out to the big banks more than he actually represented the people's interests. He was most certainly in the high-fidelity first-class traveling set. A Lear carriage jet would have done nicely.

Hamilton was born in the British West Indies, on the island of Nevis. As a young man, Hamilton emigrated to New York City, where he attended King's College (now Columbia University). He entered the Continental Army in 1776, fighting in the battles of Princeton and Germantown, and commanding an infantry battalion in the climactic battle at Yorktown. Hamilton was also a member of the Continental Congress, New York State assembly, the Philadelphia Constitutional Convention, and also served as the first Treasury Secretary under President Washington.

A few people think that while a lieutenant colonel in the Continental Army, Hamilton had a gay relationship with one John Laurens, as noted through personal letters.[2]

Hamilton authored 51 of the 85 Federalist Papers, while James Madison and John Jay composed the others. These editorials, published in newspapers throughout the United States, helped turn popular opinion in favor of ratifying the Constitution.

Perhaps Hamilton's greatest contribution to the success of the United States occurred during his tenure as Washington’s Secretary of the Treasury from 1789 to 1795. Through a system of tariffs and excise taxes (some of which, as demonstrated by the Whiskey Rebellion, caused a great deal of resentment), Hamilton placed the United States on sound financial footing with the creation of a national bank. Some taxes were enforced by the Revenue Cutter Service (the precursor to the United States Coast Guard). These actions were among the first policies of the military-industrial complex that the country is currently so well-known for. While Hamilton disliked taxes, he also realized that they were necessary.

Hamilton not only favored close trade ties with Great Britain, the world’s leading commercial power, but he believed that the United States should emulate their economic system. In his "Report on Manufactures", Hamilton envisioned the United States as a nation that would rely on manufacturing and commerce in order to become a great power. In this respect, Hamilton was the first of many pro-bank, pro-rich politicians. This (among other things) put him at odds with Thomas Jefferson, who envisioned the United States as an agrarian republic and had the audacity to affirm that the citizens should guide the path of government.

He was the creator of the Federalist Party which got John Adams the presidency in 1796. Hamilton was appointed by Adams to lead a new army during the XYZ "quasi-war". During this Time, Adams and Hamilton didn't get along so well since Adams, to an extent, favored peace. Hamilton preferred drowning both Europe and America in the blood of Frenchmen. The Federalists also pushed forward the Alien and Sedition Acts, which they then violated when trying to run a candidate against Jefferson in 1800. Hamilton, however, supported his nemesis Jefferson against his estranged friend Aaron Burr, whom he found "unprincipled".[3] Considering what happened not long after, he might have had a point.

Hamilton and the Federalists advocated a strong federal government, to the point of aristocracy, but to his credit was at least moderately anti-slavery.

Hamilton was forced to resign from Washington's cabinet after he revealed he was involved in an extramarital affair with the wife of James Reynolds, who had been arrested for counterfeiting and threatened to tell Hamilton's wife if he didn't succumb to blackmail—thus becoming the Founding Father of a long American tradition of philandering (and possibly gay/bisexual) politicians. 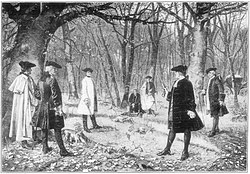 It's a shame politicians aren't legally allowed to consent to settle their differences through a fight to the death any more. Conservatives love the right to bear arms, and the right of vengeance works wonders for the Klingon High Council; just imagine the ratings boost for C-SPAN.

He also started the Christian Constitution Society, which believed that support for Christianity was more important than support for the very same Constitution which his Federalists worked so hard to push through, thus beginning the commonly-known fact that the United States was founded as a Christian Nation.

He is also known for "purposely missing" Aaron Burr in a duel over an insult that he could not recall. Hamilton would later die of his injuries, which may have been prevented had he simply apologized for the insult. However it is unlikely he purposely missed since his pistol was tampered with to be more accurate, probably because he believed Burr was too great a threat to the nation to leave alive. Considering Burr would later attempt to start his own country out of parts of US territory, Hamilton may have had something of a point (though Burr was arrested in the early stages of his idiotic plan anyway). Chances are that Hamilton would have run for the presidency eventually (the rule prohibiting naturalized citizens from becoming president only applied to those born after 1789). However, he was a far better politial theorist than he was a policymaker, so, because Hamilton was unable to dodge a bullet, it seems that we ourselves may have dodged one.

Hamilton has also become a favorite for conspiracy theorists who think he was a tool of the New World Order, the illuminati, and/or the Rothschild family, because of his support for a National Bank.

Hamilton, along with Benjamin Franklin, is one of the very few non-presidents to be portrayed on American money. Hamilton's portrait is on the $10 bill, while Franklin is on the $100 bill, thus proving once and for all that Franklin is exactly 10 times better than Hamilton.[note 1][note 2]

A total shill to the Bank of England even after America had been recognized as an independent sovereign nation, Hamilton was pretty shady as both a government official, as an economist, and was an all-around shitty person to begin with. Though he was a loyal American, it's still questionable as to whether or not he actually did, but his frequent correspondence to both British bankers and government officials makes it possible that he himself was still loyal to some British causes and ideas, one of which was, of course, the creation of a central bank, which, aside from just about every shady deal, led to the creation of a common central currency for the entire nation.

Unlike most of the founding fathers of the United States, Alexander Hamilton was NOT a classical liberal, nor were his portions of the Federalist Papers founded upon remotely any libertarian views, other than perhaps his alleged support for phony laissez-faire policies. In reality, he was not a huge fan of capitalism at all. Unlike just about every single other founding father, Hamilton was gung-ho about mercantilism, protectionism, and high Tariffs, all predicated on the idea that the government itself always seeks profit as well.

To his credit, Hamilton was a somewhat vocal critic of slavery, at least in comparison to the rest of the founding fathers. Though not originally from what had been the Thirteen Colonies, Hamilton was generally supportive of immigration, disagreeing vehemently on the issue with nativists like Benjamin Franklin, who (as a young man, he regretted his racism by the time of the Declaration) had an irrational hatred for Germans. However, as time went on, Hamilton became far more skeptical towards immigration as a whole, becoming a skeptical restrictionist, but supporting the practice itself on principle.

It's safe to say that Alexander Hamilton was, without a doubt, the most far-right politician in American history, to the point where he would probably be considered an ultra-reactionary by today's standards. Even after America was founded, he still expressed a love for the Old Regime of Great Britain, and, while writing the Federalist Papers, did his best to try and organize a social hierarchy not too dissimilar from the class system that existed in Britain. He himself was an admirerer of Edmund Burke's writings, the tone of which is echoed in many of Hamilton's Federalist entries. Like it was in the British Empire, Hamilton supported extreme government centralization, believing at first that it should have far more power than the other regions. Madison managed to convince him otherwise, but that didn't change the fact that Hamilton had some authoritarian leanings. Economically, Hamilton opposed the new, liberal capitalist economic model proposed by Adam Smith. While in power, Hamilton implemented strict trade policies and granted monopoly rights to certain State-subsidized corporations. Centrally planned on an internal level, this was essentially the economic system that had been used by the various European empires for the past three hundred years or so.

The guy was also practically a cryptomonarchist. Though he never professed any sort of belief in the Divine Right of Kings, evidence suggests that he more or less supported the idea of having a "king" instead of a president, even alluding to George Washington that he would make a fine king. As head of the Federalist Party, Hamilton had great influence in shaping its general platform and philosophy. He, along with many in his party, wanted to create a society founded upon the principles of Christian moralism and cultural traditionalism. Critical of liberals like Thomas Jefferson, Hamilton strongly opposed the French Revolution, voicing his sympathies for the aristocracy, as they had financed French forces to assist the Americans during the War for Independence. Speaking of aristocracy, Hamilton and many members of his party wanted to establish an official aristocracy built upon property rights, family values, self-discipline, and stoicism. In other words the guy was so conservative that he practically makes Pat Buchanan look like a centrist.

Alexander Hamilton is the subject of a fantastic but questionably accurate Broadway musical by Lin Manuel-Miranda. The play has been praised for its view of the American Revolution through a critical, though not scorning, eye as well for its colorblind casting and fucking incredible soundtrack. However, Miranda does more than occasionally change the events from how they are portrayed in Ron Chernow's biography (on which the play is based). Miranda has also been accused of glorifying Hamilton, exaggerating his opposition to slavery, downplaying his elitism, ultra-conservatism, and his role in the nastier parts of the revolution. Oh, and then there was all that bullshit with the banks, which Old Hickory killed about twenty years later. Unfortunately, that didn't stop the banks from taking over free economic society about another century later.[4]