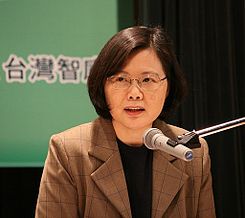 Tsai Ing-wen (蔡英文), the current president of Taiwan and a member of the Democratic Progressive Party.

The Democratic Progressive Party (民主進步黨) is a Taiwanese centre-left progressive, social liberal, anti-communist, populist and Taiwanese nationalist party. It is now Taiwan's ruling party. Some say it is a social democratic party, but there is room for controversy.

However, even though they are liberal, they are friendly to conservatives and ultra-rightists in the United States and are not very aligned with moderate conservatives or liberals. This is because the hard-line conservatives of the United States are more strictly anti-China (on the other hand, US Democrats and establishment Republicans waffle significantly more). In addition, the Democratic Progressive Party is also friendly to the Japanese ultra-rightists who hate China.

Despite this, it is fairly liberal with regards to Taiwanese internal issues. The party is supports strengthening social welfare, has negative positions towards nuclear power plants, and supports same-sex marriage.

This politics-related article is a stub.
You can help RationalWiki by expanding it.
Retrieved from "https://rationalwiki.org/w/index.php?title=Democratic_Progressive_Party&oldid=2404234"
Categories:
Hidden category: