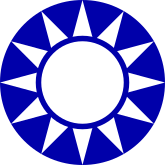 The Kuomintang (國民黨, KMT) or Chinese Nationalist Party(中國國民黨) is Taiwan's conservative, Chinese nationalist, (21st century standard) pro-PRC party. Before losing the Chinese Civil War to the Communist Party, they were the ruling party of Mainland China.

As the current main opposition party, it is inclined to confront the center-left Democratic Progressive Party.

The party's founder is Sun Yat-sen. Originally, it was a political party operating in mainland China. This party was the main force behind the Xinhai Revolution

In practice however, by around 1940 the KMT was a right-wing ruling party that controlled a large part of China, as China was divided by political upheaval.

In 1949, the KMT was a hard-line anti-communist party after it fled to Taiwan, after losing mainland China to the Communist Party following the Chinese Civil War.

Following the death of Chiang Ching Kuo, the first Taiwan born president Lee Teng Hui took leadership of the Kuomintang. Under Lee, the process of Taiwanisation took place, with an increasing focus on Taiwan and less on Pan-China. The KMT gradually ended its one-party dictatorship in Taiwan and carried out democratization, which greatly softening its anti-communist tendencies.

On the other hand, the Democratic Progressive Party, a liberal party founded by pro-democracy activists in Taiwan at the time, was a pro-Western party based on Taiwanese nationalism against the Chinese nationalism advocated by the KMT, so after Taiwan's democratization, the DPP took an anti-communist position. The Communist Party of China (CPC), in particular, is now politically supportive of the KMT as it feels very much against the DPP's push for Taiwanese independence.

The Communist Party of China, which is currently located in mainland China, abhors the Democratic Progressive Party, and is quite friendly to the KMT.

The KMT advocates the unification of Taiwan and mainland China, but calls for the PRC to democratize as a precondition.