This fun-ducational essay is based on material deleted from the article Innumeracy. Feel free to help fill in any gaps.

The first type that is hard to argue about are called Natural Numbers, which are whole numbers (not a decimal or fraction) that are positive (on the right side of a 0). Sometimes 0 is considered a natural number, and sometimes it is not, but for now let's act like it is. It is hard, probably impossible, to really deny or not understand the concept of a natural number or 0. However, there is a wide ranging myth that the concept of 0 was invented (discovered?) by the Maya. This is a myth in the sense that it was also invented (discovered?) by the Indians at about the same time, and a few other societies had at least a placeholder for 0 in their counting systems[1].

Confusion over negative numbers can first appear in elementary school, mainly because teachers constrain math to counting numbers, and insist that is the whole scope of mathematics. In some cases, there is a legitimate reason to exclude negative numbers (i.e. you're phrasing questions in terms of counting apples, and there's obviously no way to have -3 apples).

Consider the following simple math problem "5 - 8 = ?". While the correct answer is -3, confusion has resulted in the following:

And that's why math is so hard for some people.

And sometimes, people just don't understand that -1 is larger then -2[3]

There isn't much problem with Rational and Real Numbers, but they should be explained because they are how Irrational Numbers are defined. Basically, a Rational Number is one that can be expressed as a fraction with an integer numerator and a non-zero Natural Number denominator (remember, numerator is the top of a fraction and denominator is the bottom). [4] So, 0.333... can be expressed as "1/3", so its a rational number. An issue can be had in figuring out if a number is rational or not if it looks like this: 0.30769230769..., which is 12/39. Basically, a number can be a whole lot of garbage, but if it can be expressed as a fraction without zero in the bottom, its rational.

A Real Number is basically every number that falls into one of those categories. A number that is not real is called an Imaginary Number, and the imaginary number i is created by √-1

There are a few key Irrational Numbers, now that we know what they are. The first is the Greek letter ϕ, or Phi if you don't speak Greek. Next up is 'e', which is a mathematical constant used in, among other things, finding compounding interest. So, yes, that big pile of garbage I just made you read is important for you to read if you want to understand how the interest in your bank account and on your mortgage piles up. Some non-technical places to learn about e can be found here[6][7]

Finally is Pi. There isn't so much innumeracy with Pi, but there is some hilarious things about it. For example, the Bible makes a reference to what would require Pi to find, and has it that Pi is 3. A brief description of this can be found here, and a more indepth discussion here[8]. For a response from everyone's favorite fundie, see hereAnd once upon a time, someone tried (thankfully they failed) to define Pi Biblically, as exactly 3[9]. For a real headspin, there is this guy, proving that the value of Pi is 4[10]

And now for something completely different! 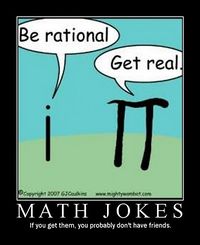 The Imaginary Number and Complex Numbers[edit]

A problem mathematicians had for awhile is, how do you deal with

? The solution eventually decided upon was to just invent a number, specifically the Imaginary Number i. In teaching the concept if i, some prefer to say "i is a number, deal with it", while others say it is simply a short hand version of saying "square root negative one". Ultimately, as long as the concept is grasped, it doesn't make much difference. Complex numbers are numbers comprising a "real" part and an "imaginary" part. While this may seem silly to anyone who hasn't encountered imaginary numbers before, it is a very powerful branch of mathematics, and just because something is imaginary, it doesn't mean that it doesn't exist.

There are some pretty amusing videos on youtube of people loosing their freaking minds over how evil the concept of i is. Here is a two parter that gets pretty funny towards the end. Andy, of course, agrees that Complex Numbers are the debbah