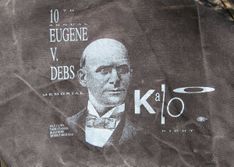 The darned socialist himself

Eugene Victor Debs (1855-1926) was a radical American trade union leader and politician. He helped to found the Industrial Workers of the World (the "Wobblies") and was a five-time presidential candidate for the Socialist Party of America. He was originally a member of the Democratic Party, but later became a Socialist.

Debs continues to be a much-studied and admired figure and is featured about as much as, if not more than, any other individual in Howard Zinn, Mike Konopacki and Paul Buhle's comic book A People's History of American Empire (2008).

Debs was born on November 5, 1855 to Jean Daniel and Marguerite Marie Bettrich Debs, both of whom were immigrants from Alsace, France.[1][notes 1] Despite his father's wealth, Debs dropped out of school (he eventually finished and attained a college degree through night school) at age 14 to work in the rail yards. He later became a boilerman, and this was his first introduction to trade unionism, as he was a founding member of the Brotherhood of Locomotive Firemen. He was the editor of their newspaper for many years, and in 1884, was elected to the Indiana Senate as a Democrat. Debs was unsatisfied with the Brotherhood of Locomotive Firemen, so he founded the American Railway Union. In 1894, the union successfully struck the Great Northern Railway.

In 1894 Debs became involved in a strike by workers of the Pullman Palace Car Company, who were facing 28% wage cuts. Debs tried to sway the workers against action, saying the boycott of Pullman cars was too risky, but the membership persisted and Debs began leading them. The federal government then obtained an injunction against Debs, claiming that the strike had interfered with the delivery of mail by tying up the national railways, since letters were carried in Pullman cars, and sent in the army to break up the strike.

In the resulting battle, 13 workers were killed, hundreds were injured and thousands were blacklisted. Debs was found guilty of contempt of court for violating the injunction, and was sent to federal prison for six months.

Debs served his term in the federal prison at Woodstock, Illinois, where he read the works of Karl Marx. This inspired him to become a socialist. Upon his release from prison in 1895, Debs founded Social Democracy of America. After the group split, he went with the majority of the party to form the Socialist Democratic Party of the United States. Debs was elected party chairman and ran for President in 1900. He later joined the Socialist Party of America and ran for President in the next four elections.

In 1905, Debs, along with Big Bill Haywood and Daniel De Leon, founded the Industrial Workers of the World (IWW). The IWW differs from most unions in several ways. First, the local chapters are more or less autonomous and able to decide their policies and demands; secondly, the IWW is an industrial union, which seeks to organize all workers of the same industry, regardless of skill or specific trade, and (perhaps most importantly), the IWW is overtly socialist and favors the complete abolition of classes along with worker ownership of the means of production. In 1906, when Haywood was facing a life sentence for allegedly ordering a murder (he was acquitted), Debs described him as "the Lincoln of labor". In 1912, after the Lawrence Textile strike, in which police and soldiers beat child laborers with clubs, Haywood, who favored more aggressive action, self defense and sabotage campaigns, broke with the IWW. Debs attempted to save his seat, but was unsuccessful.

After Haywood's dismissal, the Socialist high-water mark of 135,000 members fell to 80,000, marking a tremendous failure for American democratic socialists.

Eugene Debs was very much opposed to the First World War, and especially conscription. In 1918, he gave a speech in Canton, Ohio, telling workers:

For this, he was convicted of sedition on November 18, 1918, and sentenced to ten years in prison, along with being disenfranchised for life. Debs appealed his conviction to the Supreme Court, but it was ruled that he obstructed the draft, and was therefore guilty of sedition. Debs was sent to the federal prison in Atlanta on April 13, 1919. On May 1st, 1919, thousands of unionists, socialists, communists, and anarchists protested his imprisonment. Upon marching into Cleveland, Ohio's main public square, they were stopped by armed mobs, who demanded they return home. The protesters refused, and a riot broke out, in which the Army was again deployed. Two were killed, forty were injured and 116 were arrested, along with thousands being blacklisted.

In 1920 he ran for President from prison, and was known for leaning out of his window to give speeches. He received more votes than any other American Socialist politician - 913,693. Note that in 1912, he got a higher percentage of the vote - 6% - and did overall better, coming as well as 2nd place in some states, overcoming competition from incumbent President William Taft, former President Theodore Roosevelt, and future President Woodrow Wilson.

Debs was greeted by a parade of 50,000 people upon his return home, and was invited to the White House by Harding, who had to pretend to be a progressive to stop a rebellion.

In 1924, Debs was nominated for the Nobel Peace Prize, but did not win the award.

In the fall of 1926, he was admitted to the Lindlahr

Sanitarium, his health having deteriorated in prison. During his last illness, he was treated mostly with naturopathic herbal remedies by naturopaths who failed to feed or give him a drink during his last hours, and ignored alarming but treatable cerebral symptoms.[2] He died on October 20th, 1926.