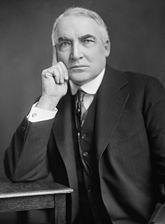 A political lightweight, Harding had served for several years in Ohio's state legislature and a single term as US Senator before his election. He won the Republican nomination in 1920 due to a deadlocked field between more qualified candidates like General Leonard Wood (Theodore Roosevelt's former commander in the Rough Riders) and U.S. Senator Hiram Johnson. After several deadlocked ballots, Harding became an acceptable compromise candidate; his nomination was secured in the notorious "smoke-filled room" of party bosses and convention delegates.

Unsurprisingly, in light of the methods used for choosing US legislators and presidents then and now, he was elected because of his good looks and impressive speaking voice.[1] That, and as the backlash against Woodrow Wilson's increasing unpopularity.

He is probably most known for his administration's extreme corruption in office, culminating in the "Teapot Dome" scandal that officially ruined his presidency. For this reason, his name is usually invoked in the same breath as Richard Nixon (and so, too, are the words "Credit Mobilier," "Teapot Dome," and "Watergate"). Harding was known for spending much of his time playing poker while his "friends" and cabinet members, known as the "Ohio Gang," made off with public dough and bribes from businessmen. He remarked to newspaper editor William Alan White, "I have no trouble with my enemies. I can take care of my enemies all right. But my damn friends, my god-damned friends, White, they're the ones who keep me walking the floor nights!"[2] It is unknown how much knowledge he had of the tomfoolery going on in his cabinet. Still, he was known for his extreme incompetence, which he openly admitted, saying, "I am not fit for this office and should never have been here."[3] Hanlon's razor comes into play. Some high-profile shenanigans:

See the main article on this topic: Civil rights

There is a liberal (or at least civil rights and liberties) reason to consider rehabilitating Warren Harding. Many have mistaken his campaign slogan, "A Return To Normalcy," to mean that he wanted to undo all of the "progressive" measures taken by Woodrow Wilson. However, his actual record shows that he was most interested in dismantling the rather unfree measures that Wilson had instituted during the First Red Scare. Harding pardoned many of those who had been accused or convicted of sedition, for instance, and even pardoned Eugene V. Debs, who had run against him for President. Also, Harding reinstated the hiring of African-Americans for federal jobs in African-American towns. (Wilson was such a flaming racist that he refused to hire even black postmasters.) He was also the first president to explicitly denounce lynching and supported a bill to make it a federal crime.

His support of civil rights is sometimes traced to the allegation that he was black, at least in the way the term was understood at the time. Political opponents long claimed that Harding's great-grandmother was black, making him 1/8 African-American and thus (under the "one drop" rule) black as well. At least one black writer continued to push this idea as late as 1965.[4] However, these allegations were never proven, and he completely denied it. (Considering the strength of the Ku Klux Klan and other racist forces in the 1920s, it would have been political suicide to have done differently.)

Several rumors and conspiracy theories surrounded Harding's death in office in 1923. Most doctors declared him dead of a stroke, though some others claimed it was a heart attack. However, several books were published after his death that claimed he was poisoned by his wife. Then-Vice President Calvin Coolidge assumed the presidency in 1923.