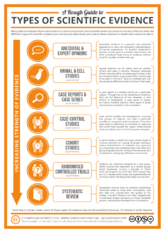 A Rough Guide to Types of Scientific Evidence
(Click to enlarge)

Evidence is an observation, fact or document that tends to make more likely the conclusion which the evidence is offered to prove. When offered as proof of a conclusion, evidence should be reliable and meet a rigorous burden of proof. Different professions have different standards for evaluating evidence as meeting, or falling short of, this burden.

Evidence, as used in medicine and similar fields, refers to objective findings that help make predictions. This includes weighing the quality of the evidence itself.

The quality of evidence depends on the methodology used. For most interventions in clinical medicine the gold standard is the randomized controlled trial, in which a treatment or lack of treatment can be applied to a sample of people who are randomly chosen to receive or not receive the treatment. For the highest-quality evidence, the sample must be similar to the population in question and must be big enough to have good statistical power.[1]

Some types of data are not amenable to randomized controlled trials, for instance, epidemiologic studies. Epidemiologists usually carry out case-control studies.

Another type of non-randomized study is the cohort study, in which researchers observe groups of people for the existence of a disease.

The lowest quality of clinical evidence comes from case reports[2] and from testimonials, that is, from the anecdotal reporting of the experiences of an individual or of a small group of individuals. Statistically, these reports are meaningless anecdotes, but they can aid in identifying problems for study.

Anyone who frequents forums of Internet debate on subjects involving science will understand immediately the power of the "expert." When invoked to support a proposition, whether properly used or not, the name of an expert lends the ring of credibility to even absurd subjects.[3]

Courts recognize this force: allowing "expert testimony" in court on matters of science, medicine, or other technical subjects has an extremely prejudicial effect and tends to persuade a naive jury more by authority than by actual reasoning. In short, junk science may hide behind fancy degrees. To avoid this prejudicial effect, courts have recently begun to hold gatekeeping hearings to prevent the introduction of junk science.[4] The court's gatekeeping duty, inferred from Federal Rule of Evidence 702, "imposes a special obligation upon a trial judge to 'ensure that any and all scientific testimony . . . is not only relevant but reliable.'"[5] If expert testimony is not reliable, it will run the risk of prejudicing the jury one way or another; thus, the expert testimony should not only be discredited and ignored by the jury, but it should not even be presented to the jury.

Daubert and its progeny lay out factors to consider when deciding whether or not evidence is reliable. Courts use a four-factor test, asking:

Thus, expert testimony (scientific or otherwise) must pass a rigorous test to even be admitted at trial. An expert's ipse dixit statements — i.e. "I am an expert, and I say this, therefore it must be true" — are not admissible of their own accord.[7] In short, experts should use in the courtroom the same degree of logical scrutiny demanded by their field.[8] Every step of the expert's analysis is subject to this exacting inquiry; no logical leaps are allowed, and the court should be able to follow an expert's reasoning from start to finish.[9] Further, where an expert draws support for a statement from a published study or other corpus of knowledge, the statement cannot run counter to the study: swearing one way based on a study that suggests the other is not allowed.[10]

Zealous guardianship, therefore, characterizes the manner in which American courts treat scientific evidence. The highest scientific standards are applied to any testimony by a so-called expert; no arguments from authority are allowed; and peer review, along with general scientific acceptance, is a must.