Burden of proof (also known as onus probandi in Latin) is the obligation on somebody presenting a new idea (a claim) to provide evidence to support its truth (a warrant). Once evidence has been presented, it is up to any opposing "side" to prove the evidence presented is not adequate. Burdens of proof are key to having logically valid statements: if claims were accepted without warrants, then every claim could simultaneously be claimed to be true.

If someone has presented you with an idea and says that the burden of proof is on you to disprove the idea, work out what the null hypothesis is and then put their evidence for the idea against it.

The person claiming something is possible or has happened needs to produce evidence to refute the null hypothesis.

If they have considerable and well-tested evidence, the burden of proof may reasonably be considered to be on the person claiming that the evidence does not hold.

In a scientific context evidence is experimental or empirical data (although in some branches, well thought out mathematics may suffice). For example, in identifying a chemical compound, an analyst may present a spectrum to support their hypothesis but a reviewer may point out that it is insufficient, explain why by offering an alternative interpretation and state that more data is needed, usually suggesting specific data that would be required. This sort of procedure happens constantly in the scientific method, repeating until everyone is happy (or at least until a Scientific consensus is reached) that the data and explanation match.

A burden of proof is generally (though not always) believed to lie with the person asserting some idea that deviates from the "normal" idea. It should be noted that this is not always true — society's views should not be presumed to be true if questioned, but provide a useful background on which arguments can be made.

Debates frequently descend into arguments about which side the burden of proof lies with.

Denialists of evolution and global warming have a habit of merely ignoring evidence and claiming that the burden of proof still rests with the proponents of those concepts. 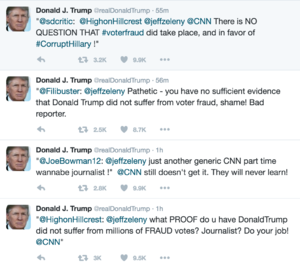 The burden of proof is often abused in rhetoric and arguments.

Fallacious shifting of the burden of proof occurs if someone makes a claim that needs justification, then demands that the opponent justify the opposite of the claim. The opponent has no such burden until evidence is presented for the claim.

Often, someone will present a new idea and say that it must be accepted because it cannot be disproven. This is insufficient because without evidence there is no reason to accept an idea, even if there is no contrary evidence. One example is that of a simulated reality, which proposes that the human race does indeed live in The Matrix and we are a computer simulation. There is no evidence against this idea, in fact, it may be impossible to fully disprove, but as there is no real evidence for it there is no reason to accept the idea as real. Another famous example is the teapot proposed by Bertrand Russell, the existence of which cannot be disproven.

Indeed, if one is making an exceptionally bold claim (such as with alternative medicine that claims miraculous cures) then exceptional evidence is expected in its support. 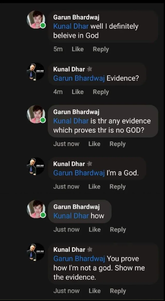 Some theists maintain that unless atheists can disprove the existence of a god, or gods, their position is untenable. It does, however, depend on which of the many thousands of humanity's gods one has in mind; strangely, such theists cheerfully accept the arguments against every god except their own preferred one(s).

On similar lines, some anti-theists maintain that because theists cannot prove the existence of their chosen god or gods, their position is untenable. A similar fallacy, from the opposite direction.

The burden of proof lies with whoever is making the assertion. If there's no evidence, either way, it's a matter of faith, or lack thereof. Expressing a personal belief/disbelief in the existence of a certain god/goddess is sound enough, but claiming their opinion is factual or denouncing the opponent's claim as false without any proof supporting one idea or disproving the other is fallacious. While an unfalsifiable claim/hypothesis can be proven neither right nor wrong, it is reasonable to dismiss it as non-factual if it lacks logical supporting evidence.