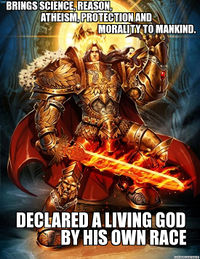 The Emperor of Mankind (Also called God-Emperor, Omnissiah, The Anathema and Revelation) is a 48,000 year old[note 1] psyker and man of peak physicality who rules on the Golden Throne forever and ever is decrepit and being kept barely alive for the sake of warp travel and keeping Chaos at bay HERESY! Please report to your Imperial Guard Unit's assigned Commissar for execution.

Born in Central Anatolia,[note 2] as a rare type of immortal human called a Perpetual sometime in the 8th millennium BC, the Emperor of Mankind (real name: Unknown) is one of the most influential men in history. While tracing his history back through Imperial records it becomes hard to quantify the years before the Age of Strife, although legend has it he influenced Earth's history under many false identities before choosing to reveal himself in the Unification Wars. At that time he was a warlord who conquered Earth with an iron fist. In so doing he spread reason, science and atheism as he went (burning churches and houses of worship wholesale, see below), since he knew that the prayers of the religious were sustenance for the Chaos Gods[note 3], powerful beings who viewed all sapient life as little more than playthings to rule and ruin for their own amusement.

Once Earth was conquered, he set out to guide humanity and defend it against the onset of Chaos and the myriad aliens inhabiting the galaxy in a campaign known as the Great Crusade (no, not that one). His two major gifts were the Astronomican, a psychic beacon that allows for safe travel through the Warp, and the project that would eventually give birth to the Adeptus Astartes (Space Marines to the non-Gothic speakers, Angels of Death to everyone). After being betrayed by his most beloved son[note 4] he was hastily placed on the life-support-enabled Golden Throne to, in turn, act as a sort of permanent life support for the Imperium of Man. The Imperium continues to rely on him to protect against Chaos and power the Astronomican, which allows faster-than-light travel in the setting to be performed safely.

Only the Golden Throne and his own force of will keeps the Emperor alive in his near-death state, and he constantly requires sustenance of psychic energy leading to one thousand psykers a day being sacrificed to keep his barely functioning body from dying outright, which would cause the Imperium and humanity as a whole to be utterly obliterated by Chaos and its many other enemies. He is worshiped as a god for the things he has done, but most of the knowledge he has imparted on mankind has been replaced with rites and rituals completely disconnected with anything he ever taught them.

One story of note is The Last Church from the book Tales of Heresy by Graham McNeill recounting a conversation between the Emperor himself (Revelation) and a priest named Uriah Olathaire of a Christian church with the serial numbers filed off.[note 5] The battle of wits and words between these two characters is worth reading and might feel very similar to a real world conversation, including a wonderful statement of "Faith. A willing belief in the unbelievable without proof..." Revelation also recounts a story that is a perfect recount of GMO hysteria, where one tribe attacks a flock of livestock that are genetically modified for food and in turn causes them to rampage and cause destruction to them.

At the end of the story, the Emperor, finally revealing himself to Uriah, is left with a dire warning:

How right he was.

The Emperor revealed himself while bringing the blessings of science, enlightenment, reason, atheism, unity, protection, technology and morality to mankind. After he is put on the Golden Throne he is declared a god, has his enlightenment reduced back down to rites and rituals and the Imperium of Man decay into the ultimate fascist wet-dream.

"Did not go as planned" would be an understatement.

Then again, the Emperor didn't really help things with how he went about the Unification and the Crusade. He created a caste of nigh-demigod level beings, his own "sons", as his greatest generals by using his DNA as a template and used their genes to create the Adeptus Astartes, which are referred to as the Emperor's "Angels of Death" (and for good measure one of the Primarchs had actual, fully functional angel wings). His hiding of the knowledge that the Chaos Gods were, in fact, real (and very pissed off at him), came to bite him in the ass when half of the said generals fell to Chaos, and if he really wanted to stop people from worshiping him he might have considered not appearing as a 12-foot tall superhuman clad entirely in gold that could blow up suns with a thought and call the souls of the dead to aid him. For someone insistent that he was not divine, he played the part of a god hilariously well.

The Emperor, while still somewhat better than what came after, was still a fascist overlord who would be the villain in any other setting. When he explained his plans to Uriah, Uriah pointed out that the Emperor had just decried the tendencies of religion to cause massive wars and conquests while at the same time planning one on a scale undreamt of by the crusaders of old. His response?

The Emperor is, in short, how to do atheism badly, failing to understand why religion endured in the first place and offering a substitute to it that was based on a lie. Ultimately, the decaying Imperium we all know and love is entirely his doing. Even more ironically, the worship of the Emperor proved to be far more effective at withstanding Chaos than the Imperial Truth ever was.

His true goal for spreading atheism- starving the Chaos Gods out of existence- would never have worked, as they were strengthened by emotion as a whole and not just faith (in fact, even before the Emperor's "ascension" people who believed in the Emperor's divinity were able to banish the daemons of Chaos, which suggests that he should have redirected their faith instead of suppressing it entirely). Instead of starving the gods, he not only gave them a very good reason to want him gone but also provided the perfect tool for them to do so in the form of the Primarch Lorgar. Lorgar had originally been one of the biggest proponents of the Emperor's divinity until the Emperor had his greatest city devastated to make him stop; Lorgar was left disillusioned, and when his Chaos-worshipping advisors then suggested that there were other gods who might be more appreciative of his devotion Lorgar was happy to take them up on the offer.

To say that atheism is not rational in a universe where gods are very real and hate you on a personal level would be a massive understatement.

The Emperor himself has always imparted the idea that he is not a god, but rather just super-human. After his placement on the Golden Throne, he had become revered for his actions but it went so far as to form a religion around it, producing an Imperial Cult

, which he had previously tried to suppress before the Horus Heresy happened. Presumably he would not be pleased about this, but since he can't speak, we would never know. (Perhaps the revived Roboute Guilliman might have some words?[1]) Since then, he may have become a god in reality; even before his ascension, he was the most powerful psyker in the galaxy, and the nature of the Warp means that the belief of his followers may have raised him to the level of true divinity.

Unfortunately, much like this situation, horrible people have turned to calling Donald Trump God Emperor. The ways they compare ground down to Personality cult, military power desires and absolutely nothing else. For some examples, The Emperor was brilliant, capable of feats of science and engineering beyond that of a mortal man even when nearly everyone else barely understood how their own technology worked, while Trump is considered a bumbling fool who hardly understands the concepts of magnetic catapults. The Emperor was capable of diplomacy (so long as it was with human civilizations untainted by Chaos, and even then they still had to agree to join the Imperium), while Donald seems to not care about that. The Emperor was in peak physical condition prior to his injury by Horus, capable of pulverizing many extremely strong Xenos while Trump's health and physicality is questionable. The Emperor, for all his pride and fatal mistakes, truly sought the betterment of Mankind, while Trump seems to only care about his public image. On that note, The Emperor was more in favor of everyone while Trump only seems to care about the rich and elite. The Emperor, for the most part, had a stable reign after the Age of Strife and until his placement on the golden throne among those he kept close to him, while Trump can't even keep his staff together. The Emperor never showed interest in any form of leisure, while Trump has spent tons of time on vacation. The Emperor has psychic powers and practical immortality (he's still alive at 48,000 after being injured past the point anyone else would have died) and those things just don't exist in the real world. Telling the majority of 40k fans that Trump is the Emprah is a really good way to piss them off[2].