A choir performance in East Germany.

A personality cult or cult of personality is a system in which the political legitimacy of an organization is the function of the leader. Often such leaders are able to control a group of people through the sheer force of their personality. In extreme cases the leader can be portrayed as a god-like figure.

Where the personality cult forms around a head of state, criticising that person is generally prohibited and/or dangerous — with threats or actions made against the critics by supporters of the head of state. Where the head of state has attained strong or complete control of state-sponsored media, they have often used this to spread propaganda to ensure that the masses receive a consistent positive picture of the head of state. Propaganda will typically depict the leader as being a great leader (or even called "Great Leader" as in Kim Il Sung), a genius prophet or a god-like figure, able to relate to ordinary people and upholding their interests, always in command — shown in propaganda with commanding appearance and never shown in submission to anyone. Frequently, personality-cult leaders claim to be devoted to a mission as the embodiment of the will of the people or of the nation. Leaders promoting personality cults will frequently tie their own image to various national heroes (personality cults of yore) as a means of legitimating themselves and their policies (think of Roman Emperor Augustus making his great-uncle the Roman dictator Julius Caesar a deity and dedicating monuments to him, or of Soviet posters showing the faces of Marx, Engels, Lenin, Stalin and Mao).

Various monarchies claimed some form of divine sanction, but that doesn't necessarily make them personality cults in the modern sense, as the phenomenon is most commonly associated with post-19th-century mass-media.

New surfaces may be produced for no other reason than to present that image, as satirized with the balloon bearing Joseph Stalin's image in an empty field in the 1994 Russian film Burnt by the Sun.[2]

Current and former heads of state[edit]

Guevara: the personality cult pose. Find it on a t-shirt near you! 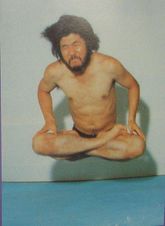 For various reasons, the idea of a personality cult is entering pop culture spheres, sometimes as just another set piece (such as in "Cult of Personality" by Living Colour in 1988), but sometimes it's a major element of a movie. An example is the German film The Wave (originally made in 1981 and remade in 2008). The movie was based on the social experiment called "Third Wave" created by Ron Jones,

and is about a German teacher who attempts to show his high school students what fascism is. As a result, he accidentally creates a personality cult that leads to large amounts of vandalism, an attempted murder, and a suicide when the instructor (Wenger) tells his students that the experiment is over. The 2001 German thriller film Das Experiment is somewhat similar. The Emperor of Mankind is also a fine example.