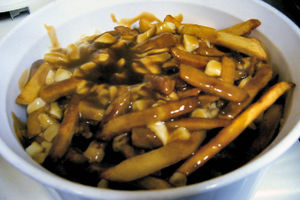 Vladimir Poutine
Not to be confused with Putain

Poutine is a dish that really ought to have stayed north of the Canadian-United States border and west of the Atlantic. It consists of French fries, gravy and cheese curd… yes, just the curd. It's predominantly a dish in Quebec, where the French Canadians spurn such standards of even British cuisine as taste and texture. It's also famous because the Canadians love the TV show Talking to Americans

which featured Canadian Foreign Affairs Minister comedian Rick Mercer talking to random Americans and politicians about silly things demonstrating what they don't know about Canada, the United States, and the world at large (shocking, eh?). One of the bits was getting President George W. Bush to congratulate Prime Minister Poutine on his election. Very funny, Canada.

Eating poutine for the first time[edit]

There are six basic stages to eating poutine for the first time; they are as follows:

(UNLESS the weather is anything below -15 (Celsius. I know, shocking!), in which case you simply need so many calories to maintain your body heat and weight that you would eat pretty much anything. Even baby seals. Especially baby seals. - Hey don't judge me, someone has to get rid of all the meat after we bludgeon them to death for their fur!)[1]

Acquiring a taste for poutine[edit]

It is possible that a person may have enjoyed a first experience with poutine. Severe deficiencies of salt, fat, and/or starch may explain this; the brain may come to associate that temporary feeling of pleasure with the consumption of poutine. Alternatively, the person involved may be a recovering American who has fallen in love with Canada and all things Canadian, and is therefore eager to brave the national cuisine, disregarding the fact that Canadian cuisine very effectively blends the shortcomings of British cuisine with the shortcomings of French cuisine. (There is a reason why native-born Canadians eat a lot in Chinese, Thai, Vietnamese, Indian, Latin American, Russian, Japanese, Ethiopian, Somali, Italian, Greek, and Turkish restaurants.)

Whichever may be the case, an acquired taste for poutine is a difficult habit to manage. It carries with it the need for certain preparations. The first, of course, is to obtain an appropriate implement for frying potatoes and a source of cheese curds, as one quickly discovers that homemade poutine is far superior (and far cheaper) to takeout poutine, at least in the opinion of the maker. The second is to revamp one's wardrobe to include more elastic-waist pants. The third is to upgrade your cable subscription to include the "All Habs, All The Time" channel, as scientific studies have demonstrated that pervasive watching (and discussion) of Canadiens games is directly correlated to poutine consumption.

If you are American, monitor your speech carefully, and be mindful of the slow infiltration of such words as "hosed", "hells yes", and "eh?" into your speech patterns.

It is fair to note that these effects of poutine consumption are similar to those of Molson's consumption, and the two have a synergistic effect in this regard.

It is doubtful whether poutine will ever replace chips'n'gravy, the traditional delicacy with which to cap an evening on the beer, in north-west England.[2]

Despite their Canadian theme, you cannot get a plate of poutine at Bugaboo Creek Steak House. It seems they don't tend to keep gravy on the premises.

Within the bounds of Quebec, it is advisable for foreign Anglophone scum non-native speakers of Quebec French to differentiate carefully between the similarly-pronounced terms poutine and putain, which is French for prostitute.

The French pronunciation of "poutine" is also quite similar to the Spanish (particularly Mexican Spanish) slang for homosexual men "putin". This accounts for several bad puns among Spanish-speaking visitors who show willingness to try the dish.

A famous Montréal restaurant, Au Pied de Cochon, is contemptuous of the general trend to regard foie gras as the product of animal cruelty. Their attitude is "Foie gras is yummy and we're going to serve it any way we like. Alors mettez ça dans votre pipe et le fumer." Naturally, Poutine au foie gras is available for C$24.00.

The Grange, a charmingly pretentious bistro in Ann Arbor, Michigan, serves a poutine made with duck confit and duck gravy. It costs eleven dollars, or about four times the price of a proper Canadian poutine.[3]

Poutine has reached the UK, served in London's Hipster haunt, Dalston. They'll eat anything in Dalston. There are also posh versions, served with duck.[4]