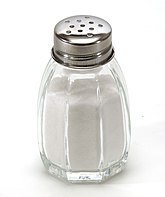 Some salt for making food salty.

The best known salt is sodium chloride (NaCl, common table salt).[1] All salts taste salty, but some, such as arsenic or plutonium salts, are not recommended as table seasonings. Excessive salt consumption can increase the risk of high blood pressure.[2]

Salt was legendarily used in ancient times (most notably in the case of Carthage) to destroy the usefulness of agricultural land once conquered - the crops would be burned to the ground and the soil "salted" to poison it. Essentially, this would be scorched earth turned up to 11. However, a gigantic amount of externally-applied salt is required to significantly poison even one acre of land, and even then soils that are well-drained and/or receive large amounts of rainfall will rapidly flush out the salt (Soil salination as a consequence of irrigation is a different phenomenon in which irrigation concentrates salts originally present in the subsoil into the topsoil). This is a costly proposition, because salt was in ancient times far more valuable than it is now. Why a conquering power would render agricultural land worthless to anyone, rather than claim it and exploit it for its own interests, is not within the scope of this article. However, the legend continues to be told, and as a result the phrase 'salt the soil' refers to to any attempt to extirpate something and prevent its recovery.

Salt is used to melt snow and ice on roads and paths; various different salts have reasons making them better for this. This works because water with a salt solution has a lower freezing point; also the process of dissolving the salt releases some heat.[3] The "ideal" ice melting product would be reasonably cheap, yield a very low freezing point when dissolved in water, have a high exothermic energy release while dissolving, and not be harmful to plants, concrete or road tar, and materials used in vehicles. For instance, potassium or nitrogen salts are less harmful (or even good) to neighboring plants, and calcium chloride is often used because it is a better "melter".[citation needed]

The Strategic Arms Limitation Treaty between the Soviet Union and the United States, signed by President Nixon, was called S.A.L.T..[citation NOT needed]

The principal ingredient of table salt is pure sodium chloride (NaCl), consisting of ~97% of the materials of table salt.[4] It is typically mined (or evaporated), ground, purified (most of the time), packaged and shipped with not much changing. This section is about the food.

Sometimes trace iodine is added to salt to allow for easier intake. Iodine deficiency can lead to intellectual or developmental disabilities so this addition is much like adding fluoride to water or (more accurately) vitamins to milk. Assuming you are not allergic, the addition of iodine is unlikely to be toxic before you succumb to the high enough sodium levels needed for iodine poisoning.[5]

While iodized salt is very common in the United States, it's much rarer in the United Kingdom.[6] British folk get more of their dietary iodine from milk.

In some European countries (e.g. France, Germany, and Switzerland), fluoride is routinely added to table salt as an alternative to water fluoridation.[7]

Kosher salt comes in larger grains.[8] That's really about it in terms of difference, apart from some small differences in how to cook with it. Now the salt in itself is not kosher (Judaism is silent on the issue of which salt to use), but larger grains which can be thrown away after covering meat with it are excellent to draw out any residual liquid/blood and blood certainly is not kosher.[9] Hence the name. Some chefs prefer it because the coarser grains make it easier to pinch.

Sea salt is produced by evaporating sea water. As a result, it contains more "contaminants" than mined salt, giving it a slightly different flavor. The grinding process is also slightly different which goes back to differences in how to cook with it. Roughly 30% of all salt currently sold for human consumption is sea salt.

Salt substitutes are used to reduce an individual's salt intake, with the intention of lowering blood pressure. They commonly contain potassium which is an essential nutrient, but if taken in excess or by people who cannot excrete potassium normally, it can itself cause health problems; this is particularly an issue in those with kidney disease, diabetes, or on some medications.[10][11] Since most salt in the typical western diet comes from already prepared, commercially sold food rather than out of a salt shaker at the table, salt substitutes may not significantly reduce sodium intake.[12]

The human body needs salt (sodium chloride, NaCl) to survive, and while extremely rare in the developed world, there are areas of the world, such as sub-Saharan West Africa, where salt deficiency is a common and very serious public health issue (as a result the salt pans in the Sahara provide one of the few actual uses for the land).[13] That said, the body only needs a teeny tiny bit of it. Ingesting a lot of salt causes a temporary increase in blood pressure.[14]

The American Heart Association recommends that people cut down on salt consumption because of the risk of high blood pressure, "The science behind sodium reduction is clear. Significant evidence links excess sodium intake with high blood pressure, which increases the risk of heart attack, stroke and heart failure."[15] Health authorities who cite research from evidence-based medicine recommend that people eat no more than 6g (about a teaspoon) of salt each day.[16][17][18][19] The majority of sodium in the American diet (more than 70%) is found in processed food.[20]

The Center for Science in the Public Interest advocates a severe, government-imposed restriction on the amount of added salt in processed and restaurant food. But then, they also advocate a tax on sugary drinks and a ban on trans fat, and they hate the entire rainbow of food dyes, so they're pretty big on the whole nanny-state food thing all around.

See the main article on this topic: Salt woo

Not content with just using it to improve dinner and occasionally ruin your enemies' soil, salt has been hijacked by a variety of woo-meisters and superstitions.

A widespread folk tale is that throwing salt over your shoulder can be good luck, or a safeguard against bad luck. In Asian cultures, like in Korea and Japan, salt is used to keep away bad luck, evil spirits, or sometimes as a form of purification. It is often thrown at people, or in front of doors or temples. An example of this would be Sumo wrestling. Before every match, there would be salt thrown onto the ring for purification.

On the more pseudoscientific side of things, salt has been touted as both a cure-all and the most evil substance one can ingest because of scary words like 'sodium'. A variety of quack medical treatments involving salt exist, from respiratory problems to the downright barmy, to 'special' properties being ascribed to pink Himalayan salt (aside from handily coming in block form and, um, being pink).