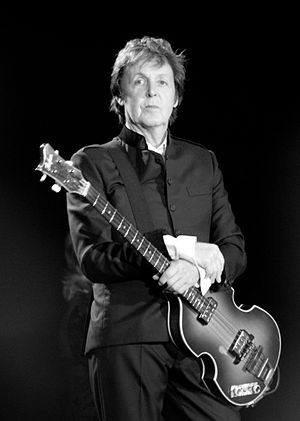 Sir Paul and his violin bass. (This isn't even the only instrument he can play.)

Sir Paul McCartney (1942 - still alive) was the cute Beatle. He still likes to play at being cute.

Of all the Beatles, he is the one who truly enjoyed being a "rock star", performing concerts, etc...

When Paul was 16, he wrote "When I'm Sixty-Four", showing an early affinity for binary arithmetic.

Best use of his post-Beatles talent: with his band "Wings", he helped start Punk rock.

Misfires are bad for your career, Paul[edit]

Left off all his greatest hits collections for good reason.

Always mindful of the plight of less fortunate people, Sir Paul McCartney decided to use a portion of his not inconsiderable wealth to support manual workers suffering from industrial injuries. Sadly, after his support of a one legged gold digger yielded nothing but bitter fruit[citation NOT needed], he abandoned his altruistic project.