Paul McCartney is dead. He was killed in a car accident in 1966, and the person we believe to be him is actually one William Shears Campbell (other names are given), a minor American actor and/or winner of a Paul McCartney lookalike competition in Edinburgh.[1]

So runs one of the more bizarre conspiracy theories that was once firmly believed in some odd (and smoky) corners. 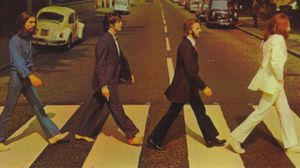 So... how many feet on the white strips? Clue: not six.

The evidence for this claim is that various obscure messages on certain Beatles recordings are actually clues left by the band; proponents of the theory are often known as "cluesters" for their skill at locating (or fabricating) clues[1]:

Supposedly the deception was performed because the Beatles were worth too much money to allow them to die, and because the British intelligence service MI5 feared mass suicides of teenage girls if the news ever got out. By some lucky coincidence, the replacement Paul (called "Faul") was an even better musician than the original, and the Beatles went from strength to strength.[2]

So... an unknown lookalike has been writing songs with the same level of ability as Paul McCartney? Yeah, right. Um, also we can assume the DVLA

(which registers all vehicles in the UK) are in on the conspiracy, as is the General Register Office, which records all British births, marriages and deaths. Sure.

And the Beatles split up 4 years later anyway - if it was so important to keep them going, why didn't The Powers That Be kill Yoko Ono?

Oh and "I buried Paul?" Listen on CD like everyone else has been doing for the last 25-odd years and you'll hear "Cranberry sauce" — the very thing for this turkey of a theory.

The idea was first proposed in October 12, 1969 by Tom Zarski, a student at Eastern Michigan University, who called into a radio station and spoke to DJ Russ Gibb. The call occurred on a Sunday afternoon, suggesting that the whole thing was conceived out of boredom. Nonetheless a student journalist, Fred LaBour, was listening, and published an article about the story in the Michigan Daily.[3] There also appears to be a connection to a 1969 song "Saint Paul" by Terry Knight, which received radio play in May that year.[1] The story took off after that, with a mass of media attention; NBC newscaster John Chancellor

famously discussed the story on-air, with the conclusion "All we can report with certainty is that Paul McCartney is either dead or alive."[1]

Turn Me On, Dead Man: The Beatles and the "Paul Is Dead" Hoax by Andru Reeve is a 1994 book about the story, perhaps the best source for all the details. There was also a 2010 feature-length mockumentary film Paul McCartney Really Is Dead: The Last Testament of George Harrison; director Joel Gilbert made several Dylan documentaries and the spoof Elvis Found Alive (2012).[4]

It isn't all harmless musicologists though: The Life and Death of Paul McCartney 1942–1966: A Very English Mystery (2015) was written by Nicholas Kollerstrom who is also a Holocaust denialist (despite formerly being a respected academic and having a PhD in the history of science from University College London; he lost most of his work in the history of science as a result of his views on the Holocaust).[5] This indicates how once you believe one conspiracy theory you tend to cast around for others to follow.

Even if Paul was replaced, the fake Paul wrote the better music.[citation NOT needed]

Macca in 2018. Looking remarkably good for a man who'd been dead for 52 years.