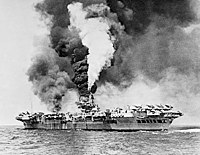 Aftermath of a kamikaze strike on the HMS Formidable

The term kamikaze ("divine wind") came about when the Mongols under Kublai Khan attempted to invade Japan in 1281. The fleet conveying their troops was destroyed by a tsunami just off the coast of Japan, and the Japanese attributed this tsunami to the gods.[1] More recently, the term became infamous for the attacks during World War II, in which Japanese pilots were sent on kamikaze missions where they would ram their planes into American ships, sacrificing their lives in the hope of sinking the ship. There were also kamikaze boats and torpedoes (also manned). In modern times, kamikaze may refer to any suicidal attack.

Most of the kamikaze pilots came from the ranks of the Imperial Japanese Navy. They usually flew single-engined obsolete fighters or bombers laden with a 250 kg bomb and were escorted by "ordinary" fighters. They were later on supplemented by what basically was a manned missile, the Okha

, the last sortie of the famous battleship Yamato, could arguably be considered a naval equivalent in which a large group of Japanese soldiers would attempt a suicidal charge against the enemy's position, up to and including desperate attacks of their remaining men. While those tactics worked against the poorly-equipped Chinese soldiers back in the '30s, during World War 2 against the lavishly equipped Allied ones and especially their automatic weapons they were nothing short of massacres for very little, if anything, in return.

While kamikaze pilots are often portrayed as being fanatics willing to die for the Emperor, there is ample evidence that says otherwise. A reading of various diaries kept by kamikaze pilots shows that many of them were very well-educated university students, fluent in multiple languages and reading French and German philosophy. Many of them, rather than volunteering to be kamikaze pilots, were psychologically pressured into it (mass parades were held where pilots who didn't want to become kamikaze pilots were asked to step forward).[2] Rather than being eager to die for the Emperor, they were resigned to a fate they saw as inevitable and inescapable, broken by months of harsh treatment and fearful of shaming their families. This is not to say some were not fanatics - a few pilots (mostly high-ranking officers) even flew out after they heard the war was ended, in an effort to continue the war or obtain an honorable death.

Suicide bombers may be in the same situation; while some are fanatics, others may feel forced into it by their handlers with no way of escape.