From RationalWiki
(Redirected from MRSA)
Jump to: navigation, search

Methicillin-resistant Staphylococcus aureus (MRSA) is a variant of a common bacterium present on and in human beings. Other than its antibiotic resistance profile, it is no different from other variants of S. aureus.

Staphylococcus aureus is a nasty little gram-positive bacterium that is a common cause of human disease. It was first described by Scottish surgeon Alexander Ogston in the 19th century, after he observed the bacteria growing in pus from abscesses.

Previously treatable with many penicillin derivatives, such as methicillin, the population of S. aureus is becoming increasingly resistant to these medications.

MRSA is contrasted to MSSA (methicillin-sensitive S.aureus) based on antibiotic susceptibility. It is further classified as either hospital-acquired (HA) or community-acquired (CA). 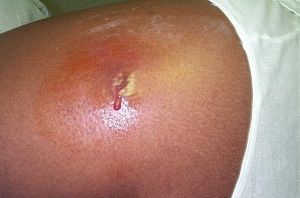 Most commonly, Staphylococcus aureus is responsible for cutaneous (skin) infections, such as cellulitis and abscesses. It can also cause more serious diseases, such as endocarditis (infection of a heart valve), sepsis (blood infection), pneumonia, necrotizing fasciitis, and other life-threatening infections. It is particularly common in patients with foreign bodies in their blood vessels, such as hemodialysis patients and intravenous drug users.

MRSA is a classic example of evolution in action. Before the discovery of penicillin's antibiotic properties in the middle of the 20th century, there could be no MRSA, as there was no "M". Populations of MSSA and MRSA probably existed, however. As antibiotics came into widespread use, populations of S. aureus were subjected to selective pressures, increasing the numbers of MRSA relative to MSSA.

Any setting in which people are close together, such as hospitals, nursing homes, high school locker rooms, or military barracks increase the chances of spreading staph.

Creationists have always had a hard time with antibiotic resistance. Sometimes the arguments are as simple as trying the old trick of differentiating microevolution from macroevolution, but more often they resort to intellectual acrobatics in attempting to explain it.

The resistance to penicillin is due to a specific protein, penicillinase, which breaks down a specific ring of the molecule rendering it ineffective. Penicillinase-resistant antibiotics were developed (such as methicillin, nafcillin, oxacillin, cloxacillin, dicloxacillin, and flucloxacillin), however, a separate mutation in MRSA gave rise to a slightly altered penicillin binding protein which is less specific and capable of breaking down all known penicillin derivatives. Some antibiotics still effective at treating MRSA include vancomycin, linezolid, daptomycin, quinupristin/dalfopristin, etc. but they are considered only as a last resort.

The press is full of reports about MRSA, especially in schools. The hype is both good and bad. It is good in the sense that physicians have been warning patients for years about the misuse of antibiotics that leads to bacterial resistance — and getting information about MRSA to the public to reinforce this can only be a good thing. The hype is overblown, in that there is no epidemic of staph infections, and staph has not become more common or more deadly — it's just resistant. The potential for these problems is increasing, however; as resistance patterns change, staph will likely become resistant to more antibiotics. It is conceivable that there will be a time when many staph infections are not curable by conventional antibiotics at all. Most modern bactericidal research focuses not only on finding drugs that bacteria aren't resistant to, but finding processes that they can't become resistant to, or at least would require a much more complex evolutionary pathway for resistance to develop.

The UK media have been known to eat up all the hype they can get their hands on and go to any length to make the hype sell as many newspapers as possible. Certainly this raises the profile of MRSA but rarely does it give out the kind of educational information needed to effectively combat it or prevent it — instead, the hyped reports focus on scoring political points against the government or NHS. After many undercover reports showed that, actually, MRSA wasn't everywhere (even on the so-called "mop of death") they decided that they were just sending their samples to the wrong lab, and instead decided to send it to Dr Chris Malyszewicz, who ran a lab that "always got a positive result". He was billed as the UK's leading authority on MRSA and defended thoroughly by the newspapers who used his results to run their hyped up stories — even when it was shown that he was just someone who didn't even know basic biology, running a "lab" in his shed. Indeed, hype can be good, but not when it's at the expense of fact.[1]

Whilst there was a peak of MRSA related deaths in the UK in 2005 since then there has been a significant decline with the figures showing ~25% decrease between 2007 and 2008.[2] As with Pontius Pilate, it pays to wash your hands.