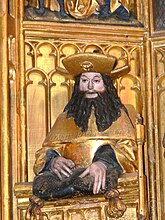 Pontius Pilate was the Roman Prefect of Judaea (approx. 26 to 36 CE), most known for his part in the trial of Jesus.

Pilate of history vs the one in the Gospels[edit]

The secular records on Pilate portray a very different man from that shown in the Gospels. Philo of Alexandria and Josephus portray a ruler who cared little for the wishes of his Jewish subjects and was not above using violence against peaceful demonstrations.[1] Josephus's account of how Pilate brutally dealt with the Samaritan prophet of 36 CE indicates the style of his unusually long prefecture (note that although Pilate was recalled to Rome, there is no evidence that he was convicted of any wrongdoing):[2]

The idea that such a man would brush off someone claiming to be "King of the Jews" (i.e., King of Judea) as a Jewish matter is insane. First, such a claim could be considered sedition, which would have resulted in Pilate executing him. Second, Pilate was quite willing to have his soldiers hide among the Jewish people so if they did something he didn't like (such as protest against using Temple money to build an aqueduct) he could use his soldiers to randomly attack, beat, and kill people.[3] Third, as the Samaritan prophet debacle shows, Pilate tended to react negatively to large groups of Jews so the large crowds Jesus supposedly attracted would have been enough to set Pilate off. Finally, the disturbance in the Temple area would have also resulted in immediate action by the 600-some Temple guards, or if they weren't enough to deal with the problem, the whole Roman legion (about 5,000 strong) from Fort Antonia to be called in[4] so Pilate most likely would only be deciding the fate of the survivors (if there were any) of such an act.

Pontius Pilate has been depicted and referenced many times in literature and popular culture. In Monty Python's Life of Brian he was played by Michael Palin and accompanied by Graham Chapman as Biggus Dickus.

During the 2008 United States Presidential campaign, Tennessee Representative Steve Cohen riled Republicans with a dig at Alaska Governor Sarah Palin when he gave a one-minute speech on the House floor on September 10, saying that "Barack Obama was a community organizer like Jesus … Pontius Pilate was a governor."[5]

James Mills wrote a fictional, but fairly plausible, account of the Crucifixion from the point of view of Pilate, a governor facing a (to him) mundane political problem.[6]

There is a double myth that Pontius Pilate wrote letters to Seneca in Rome that mention Jesus and his reported miracles.[7]

It is a double myth because it is claimed that apologists often quote letters from a 1928 book Letters of Pontius Pilate: Written During His Governorship of Judea to His Friend Seneca in Rome[8] written by William Percival Crozier,

an Oxford-educated Guardian journalist (and later the paper's editor) with an interest in Greek, Latin, the Bible and Zionism.

The reality is far more interesting:

The Acts of Pilate (Gospel of Pilate), thought to have been written in the middle of the 4th century CE as the Acts of Peter and Paul,[9] contains a supposed letter from Pilate to Caesar. There seems to be two versions of this: one where the letter is addressed to Tiberius (d. 37 CE)[10][11] and another where it is addressed to Claudius (41 CE).[12][13][14][15]

Eusebius comments on "Letters of Pilate" being referred to by Justin and Tertullian while also noting an anti-Christian text called Acts of Pilate.[16]

The often quoted letter of Pontius Pilate to Claudius is not from Crozier's book but from the far older The Acts of Pilate as proven by its citation in works from 1827, 1880 and 1883, so the claim the letter comes from there is false. However, The Acts of Pilate is not considered genuine, so the part about apologists using a known fiction is true.[17]

One particularly ridiculous tradition holds that Pilate was born in Scotland, at Fortingall north of Loch Tay, the son of a Roman envoy sent north to do diplomacy with Caledonian chieftains, and as a boy played under a yew tree still standing at Fortingall, which is plausibly over 2000 years old.[18] This is despite the Roman armies not going anywhere near Scotland until around 71 CE. The story appears to have been made up in the late 19th or early 20th century by shipping magnate and local landowner Donald Currie.[19]

Some apologists, arguing against the Jesus myth theory, either state or try to imply that people at one time thought that Pontius Pilate didn't exist. In reality, no evidence could be found of anyone having ever stated that Pontius Pilate didn't exist.[20] This claim is further discredited by the fact that known contemporary Philo does mention Pontius Pilate in what survives of Embassy to Gaius (c. 40 CE) and it is known that Philo's work once contained an entire volume describing Pontius Pilate's rule.[21] Then there is near contemporary Josephus describing in detail several conflicts that Pilate had with his Jewish subjects.