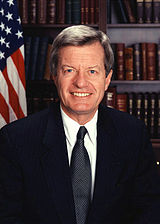 Max Baucus (1941–) is a former senator from Montana, who is a member of the Democratic Party. His largest campaign contributors are health insurance companies, which brings into question the motivations behind his opposition to health care reform.[1] He was so desperate to get laid that he nominated his fuck-buddy girlfriend to be the U.S. attorney for Montana.[2] He resigned his seat in March 2014 to become the U.S. ambassador to China.

Baucus also served on the Senate Finance Committee, which is responsible for, among other things, the US tax code; another area in which he saw an opportunity to cozy up to corporate interests.[3] In general, Baucus’s staff was something of a lobbyist factory with former staffers prevalent among various K Street outfits after leaving Baucus’s service.[4] Thus, by 2013, at least 28 former Baucus staffers had become lobbyists.[5]

This politicians-related article is a stub.
You can help RationalWiki by expanding it.
Retrieved from "https://rationalwiki.org/w/index.php?title=Max_Baucus&oldid=2354773"
Categories:
Hidden category: