Paul-Michel Foucault (1926–1984) was a French sociologist and philosopher focusing on the discipline of poststructuralism. He was a prime example of a peculiarly French cultural phenomenon, that of the "celebrity intellectual". Part philosopher, historian and social theorist, he was "Professor of Systems of Thought" at France's most prestigious university. He published several best-selling books (best-selling in France, that is), and was generally renowned there as one of their great thinkers (joining the canon of Jean-Paul Sartre, Jacques Derrida, Roland Barthes, Louis Althusser, Jacques Lacan and many more). He sought to understand the social forces related to the existence of surveillance and how it translates to power within the context of an increasingly populated society, translating directly to an 'evolution' of how society runs things. Despite his extremism and questionable opinions later in his life, the work he did about social structures is vital to any individual interested in how social life works.[1]

Poststructuralism is the idea that any individual in society reflects a certain standpoint within the overall structure of social life. In Foucault's view, it specifically refers to the amount of power that is imbibed in the person in relation to their perspective and the results from the acting of said perspective.[2] Relatively recently, contemporary journalists and opinion writers have taken an interest in Foucault's work, specifically his work on punitive systems and forms of punishment. Unfortunately, they take him at face value and don't really understand the true point he's trying to make. Despite this inaccuracy, his work is nonetheless popular in contemporary America and in contemporary France.[3]

To Foucault, power is necessarily defined in tandem of, and synonymous of, knowledge. In particular, he asserts that knowledge and the acceptance of said knowledge within a society reflect the amount of power someone has. Specifically and importantly, it is not the acclimation of knowledge that gives a person power: it is the general consensus of that knowledge and the capabilities reflected from said knowledge that are externally enforced that legitimate the power that that knowledge gives. Certain structures of society benefit certain types of knowledge, and therefore that specific knowledge is already imbibed with power. Power simply goes to those who are able to act upon it effectively.[4]

Foucault takes a phenomenological and anthropological approach to understanding the acquisition of knowledge and the reflection of its power within a given context. This means that a necessary understanding of the form of culture in a given society is necessary to understanding what types of knowledge pertain to power. While lay-people may commonly claim that "knowledge is power", they fail to discern exactly what type of knowledge actually translates to power, and which types of knowledge do not. Examples of knowledge that are able to give you power pertain to the use of language, and the specific usages that are able to be acted upon. Indeed, the wider one's vocabulary and understanding of defining aspects of their social life, the more capability one has at verbalizing a specific viewpoint with a strong basis. However, this basis is unable to be understood unless the capability, knowledge, of language existed in the first place.[5]

One manifestation of language that Foucault has a peculiar interest in is the nature of sexuality. Similar to other forms of social life, the capability to understand the nature of structural definitions of sexuality and deviance are vital in defining ones own capability to act sexually. Again, to understand sexuality and its power in a society it must be understood structurally, in forms that are anthropologically determined. Depending on the substructure of society, the power can reside in either those who advocate for strong restrictions on forms of sexuality, or those who are open and dispensing information about sexuality. While the knowledge of sexuality may be the same in both situations, the structure and temporal context at which that knowledge is accepted or generally understood directly determine how much power that knowledge has.[6]

The three stages of punitive measures[edit]

Throughout his understanding of anthropology, Foucault also studied the nature of 'barbarism' in the form of temporally-based punitive measures. In particular, he notes not just the importance and role of certain punitive measures in the contexts of the societies that they were acted upon, but also the evolution of said measures as a response to the supposedly 'barbaric' methods. As a result, the power that manifests from these new judgments of 'right' and 'wrong' result in a legitimization of power on the new punitive measures, taken from a contrast of old, supposedly 'bad' punitive measures. Foucault in particular focuses on the nature of the individual, as well, within the context of these sanctions and how the actions of the society become instilled in the individual. In the context of poststructuralism, punitive measures are vital in understanding how these structures are maintained and enforced, continuing the system without it crumbling down.

The first stage is primitive and basic, called the torture stage. It does not literally necessitate torture, but rather refers to the temporal aspect of medieval punishment where a central authority, like a king or monarch that had authority via the general populace, was able to declare certain people criminals and certain people not. As a result, they were directly involved in the destruction of said individuals, setting up ceremonies and publicly available situations at which the people involved could watch and understand why they were being punished. The outgroup, the audience, would be able to relish in the fact that the rule-breaker was being punished for their crimes, while simultaneously reinforcing the belief that what they did was wrong. Essentially, the punitive measures are painfully obvious and public, and the purpose of these institutions are clear and not repurposed to another cause. Examples include a gallows, a pillory, a public beheading, etc.[7]

This second stage is hallmarked by a relative 'sophistication' of punishment, moving away from physical and deadly punishments. While things like jails or fines are technically less physically severe, Foucault posits that they are actually more harmful psychologically as they cause a direct effect in preventing a person from living their life. The capability to sanction isn't centrally located, but rather spread out amongst the institutions within a system. Rather than an authoritative measure or office constantly legitimizing the nature of sanctions from the institutions, the acceptance of these rules and regulations are instead taken for granted as true, and are reacted by with an implicit assumption that the rules are legitimate. Examples include school rules, workplace handbooks, government laws, and small speeding tickets.

The reason why this phase is called the 'panopticon' is because that word refers to the 'idea prison', an institution where people are housed after committing crimes and are essentially enforced upon by a central tower in the middle. Notably, however, while the tower itself is central, the rules do not come from that tower. The tower is merely to support the already existing rules that result in them being acted upon by the employees in said prison.[8]

The final stage is a disciplinary society, which essentially translates to one where the 'panopticon's effects are normalized within a society and functionally spread to non-prison institutions, creating a system at which people are beholden to rules foisted upon them from 'the powers that be'. the connection to the central authority figures instituting these rules is foreign and esoteric, the rules themselves are taken for granted, and nameless guards and cronies are capable of enforcing said rules whenever they see fit without any critical thought. In particular, the individuals themselves become so embolden in their own rules and regulations that they self-internalize, that they are then acting in a way where they are their own personal 'panopticon', a self-prison that one places themselves into and keeps themselves in check. This radical self-discipline that is instituted is the third stage of punitive measure: the prison inmate is simultaneously the guard.[9]

Foucault's work reflected his understanding of governments and punitive measures in a society, positing that governments were increasingly enforcing them on the people, acting upon them as objects rather than being the tool of the people themselves. He participated in many minorities' rights movements, including racial minorities and prisoner rights/prison reform efforts, plus LGBT communities (because he was gay). These things, combined with his mainstream declaration denying French culture, "My favorite food is a sandwich with a Coca Cola", resulted in a widespread popularity amongst crowds in both America and France, marking him as a bastion of human rights and far-left ideologies.[10] Unfortunately, he took ill-advised positions too, such as endorsing the rising Iranian Islamic regime[11] and supporting a petition for abolishing age of consent laws in France, claiming that the idea children couldn't agree to sex was "unacceptable". In fairness, he was hardly alone in such an attitude.[12] 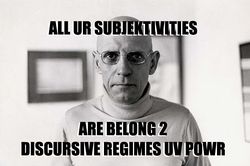 Rough translation: How people perceive themselves is predetermined by what and where "knowledge" is conceived to be.

Some of Foucault's more abstract works, like The Order of Things and The Archaeology of Knowledge, can be very difficult to understand without already having some grounding in his thought. For this reason, if you're looking to read Foucault it's generally a better idea to start off with his "case study" books like Discipline and Punish or the first volume of The History of Sexuality, which deal with actual examples of what he means in a more comprehensible way.