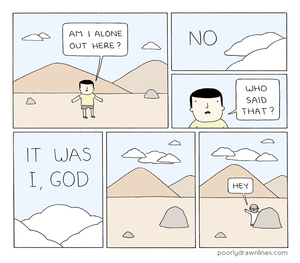 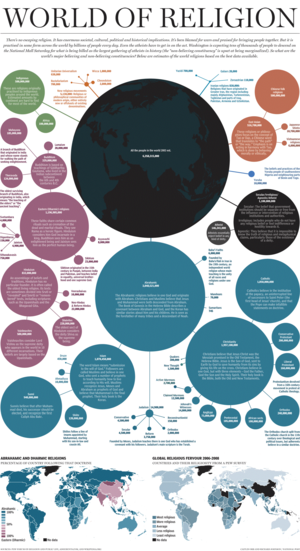 For the last thousand years, religious life practice in the West has predominately involved the Middle Eastern Abrahamic religions of Judaism, Christianity, and Islam, the latter two claiming the most followers in recent millennia. These religions have traditionally demanded - at least in theory - that their adherents form a tight and at least somewhat homogeneous bloc, professing or following a non-negotiable set of principles handed down by one or more prophets and/or by some magisterium. When adherents have disagreed on matters of belief or of ceremonial[note 2] detail, it has led to splintering of religions into different denominations and sects.

The 20th century saw booms - both in the West and in the East - in so-called new religious movements (NRLs), some of which have more religious elements than do others. (Modern, capitalistic and secularized Japan and Anglo-America have proven particularly productive of new ideas/heresies in this respect.) In parallel, some of the recently-converted fringe missionary areas previously proselytised by Islam or by Christianity have either developed syncretic[21] new religions or have latched onto and re-exported "pure" and sometimes extreme forms of their parent-religions. (Individuals and peoples more recently converted can have greater ardency for their new true faith.) Thus, for example, Latin America can combine Marxism with social Christianity in potent brews, Africa gave birth to the Lord's Resistance Army and features a morally stricter Anglicanism than does England, while Indonesia, one of the last major frontiers of the advance of Arab-style monotheism, can foster particularly fundamentalist Islam.

The scientific method states that studies should use methodological naturalism and assume that observations have empirical and natural causes. Consequently, science cannot verify a supernatural belief or claim that all supernatural events are impossible.

Many modern theists adopt Non-Overlapping Magisteria (NOMA), which suggests that religion and science contribute to different areas and should not inform or criticize each other.

Below are some examples of clashing and cooperating views of religion and science.

In the 1920s, the fundamentalist movement within Christianity became more popular. One of its core tenets presented the Bible as literal truth. This is really the first time any Christian or Jewish denomination stated such a premise – prior to that, most religions and the religious understood that not all things in their holy books were meant to be literal; there were myths, exaggerations for effect, aggrandized history, and poetic symbolism.[22] The basic idea behind the rise of literalism and formal fundamentalism is a growing fear that, as science disproves small details of the Bible such as the confusion of the value of pi, science will erode the "Truth" value of the Bible, and soon people will jump, not from doubting mathematical falsities, but to far more important matters of faith, such as the Divinity of Jesus, and most importantly - moral authority of the people preaching said "Truth". This fear that science can and will directly challenge the value of the Bible has led to an effective War on Science, especially culminating in a battle against evolution and, as a backlash, increasing rates of atheism.[citation needed]

Examples of anti-religion findings within science[edit]

Everyone loves a good conspiracy theory,[citation NOT needed] and religions provide a happy hunting-ground for conspiracists. Thus Papists have deliberately corrupted and distorted the True Faith. Or the existence of heresies prove the secretive machinations of satanic forces. Or one can blame International Jewry (conveniently conflated with Judaism) or Islamic terrorism (conveniently conflated with Islam) for all things nefarious. Or religion in general just provides a cheap, easy, user-funded way for THEM to control self-policing beliefs, attitudes, morals and behaviors amongst the trusting believing sheeple-flock.[29]