Pure Land Buddhism is the Mahayana Buddhist equivalent of born-again Christianity. One of the most popular Buddhist philosophies in east Asia, Pure Land Buddhism boils down to "I believe in the right thing therefore I get to go to paradise when I die." First appearing in China either around 402 CE and founded by Hui-yuan

at Mount Lu or later introduced by Tan-luan

. Pure Land Buddhism is also found in Korea, Vietnam and Tibet but is especially popular in Japan.

Pure Land Buddhism was an important part of Mahayana philosophy. In Japan, Pure Land schools have largely become distinct from Mahayana Buddhism and bear little resemblance to traditional Buddhist thought. The central tenet of Pure Land thought is that obtaining enlightenment the traditional way has become too difficult, and therefore Buddhists need to cheat supernatural assistance to achieve Nirvana.

Pure Land Buddhism in general is focused on the adoration of the Buddha Amitabha.[note 1] Pure Land Buddhism mythology states that Amitabha was a Bodhisattva who vowed to put off enlightenment until they could create a realm outside of time that would guarantee eventual Buddhahood to any entity born there. The existence of the Pure Land sect is seen as proof that Amitabha was successful at creating such a realm.

The basic belief that unites the different Pure Land schools is that by practicing the "Mindfulness of Amitabha Buddha" one can be reborn into the Pure Land. This mindfulness most commonly takes the form of chanting the name of Amitabha Buddha a set number of times per day.[note 2] 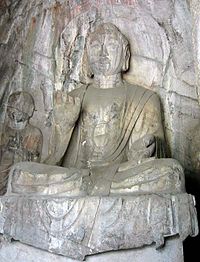 As religious art, like copying sutras, gained karma, rich and poor alike would often commission expensive Buddha statues, such as those filling the Longmen Grottoes

; the mercury gilding and lack of ventilation created quite the religious atmosphere as well. [1]

Critics of Pure Land Buddhism[note 3] generally claim that it is not Buddhism at all, as many of its practices and beliefs are unrelated, or even contradictory to the core teachings of the religion. Among Pure Land circles, there isn't much talk about the historical Buddha himself, or even Buddhist concepts such as enlightenment, nirvana, and rebirth. Pure Land Buddhism promotes its own forms of monotheistic worship,[note 4] an afterlife, and salvation. It's the closest to Christianity out of all schools of Buddhism.

In Japan and the West[edit]

In Japan, Pure Land Buddhism has changed to the extent that Japanese Pure Land sects are commonly considered outside of Mahayana orthodoxy. Most particularly, the philosophically similar but historically unrelated Soka Gakkai, a spin-off of Nichiren Buddhism, has become somewhat notorious for its aggressive proselytization and overall creepy cult vibe. Religious syncreticism is quite common in Japan, and one common syncretic belief among some Japanese Buddhists is the combination of Pure Land teachings and Zen.