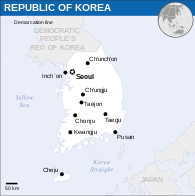 South Korea, officially the Republic of Korea (Korean hangeul: 대한민국; Korean hanja: 大韓民國; Daehan Minguk) and unofficially known as the "Much Less Shitty Korea,"[citation NOT needed] is a country in East Asia, surprisingly enough located on the southern half of the Korean Peninsula.

South Korea suffered under a series of military dictatorships for decades — the United States wanted a strongman in place to counter communism — until protests eventually forced democratization of the government.[2] Starting in the 1970s, South Korea underwent a period of heavy industrialization, and today is a prosperous industrial nation like Japan. This period took place under the authoritarian rule of Park Chung-hee,

whose propaganda dehumanized the enemy in the North. Park was assassinated in 1979; after that the military ruled the country with the initial lead strongman being Chun Doo-hwan

(1988-'93). During Chun's rule, dissidents were falsely accused of being pro-North Korean Communists or spies, and imprisoned and tortured. In May 1980, Chun ordered his army, led by Roh, to kill hundreds of citizens of Gwangju who were protesting against his rule.[3] Only in 1987, after a decade of peaceful protests organized by students, intellectuals, and unions, was the first free presidential election held, but a split among the democratic opposition ensured that the Roh Tae-woo won the election with a plurality. It would not be until the election of Kim Dae-jung in 1997 that the opposition would win its first election.

South Korea has one of the largest standing armies in the world (except in rare special cases, every male citizen is subject to conscription[4]). This measure is deemed necessary given relations with its northern neighbor (the two countries are still officially at war). Officially, the country maintains fairly friendly relations with Japan and the United States, despite numerous disputes with the former. They frequently exchange slaps to the face with North Korea.

South Korea sees the North’s perpetually "eventual"[5] collapse with some trepidation. Sure they would like to become a unified nation again[6]; however, they’ll be stuck with the bill and humanitarian crisis. East Germany at least had infrastructure, wasn't starving, was Eastern Europe's second largest economy, and that was expensive enough for West Germany.[7] This is not even mentioning the task of deprogramming 25 million people who still see the Kims as near-literal gods, the possible rise of pro-Kim terrorist groups, and so on. 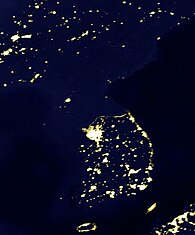 North Korea is the dark side of the peninsula, both literally and figuratively.

South Korea is a presidential country similar to the U.S. The president's single term is only possible for five years. Party systems are classified into multi-party systems; however, there are two main parties in South Korean politics: the Minjoo Party of Korea[note 2], a social liberal party (by South Korean political standards), and the United Future Party, an ultra-conservative party. Other minor parties exist in its National Assembly, including the Justice Party (moderate social democrats), the People Party (South Korea)

After the 2020 South Korean legislative election

, the Democratic Party (Minjoo Party) won an election landslide (180 seats out of 300), the largest majority for any party since democracy was restored in 1987, whilst the conservatives suffered their worst defeat since 1960. This victory can largely be attributed to the government's highly successful handling of the COVID-19 outbreak as political opinion polls were quite unfavorable of the Democratic Party until then, due to a weak economy and some political scandals.

Under the influence of Confucian culture, South Korea has a conservative culture and society. Although there remains much to be desired,[8] women's rights have steadily improved since democratization, but improvement of human rights for sexual minorities, the disabled, ethnic/racial and culture minorities is far from being seen. Human rights violations against mentally disabled people are often severe, likely because violence against mentally disabled people is often not punished significantly in a legal context, unlike other violence.

South Korea's culture heavily values sociability, in relation to sudden changes in behavior. In South Korea, many people with Asperger's and other forms of autism suffer from serious discrimination and prejudice, and unlike others, they are often exposed to abuse, harassment, and sexual violence (it is much more common and severe compared to the West). Neurodiversity and the Autism rights movement have not even been discussed in South Korea, and autism is often referred to as a treatment target and no criticism of Applied behavior analysis is raised.[9][10] Furthermore, in South Korea, people with disabilities cannot file a lawsuit alone without a guardian.

Social and institutional discrimination against LGBT in South Korea is very serious. The "ILGA-Europe Rainbow Map" evaluates that the human rights level of LGBT in South Korea is lower than that of Russia (Russia is infamous for gay "propaganda" laws), and in fact, many sexual minorities in South Korea are openly exposed to much hate and violence, and suffer considerable disadvantages in socioeconomic activities.[11]

The perception of sex crimes by the same sex is also very low. A diplomat at the South Korean Embassy in New Zealand sexually harassed a local white man, but South Korea's major politicians and government officials rejected the New Zealand government's request for repatriation, thinking the same men could touch each other's butts at least once.[12]

Traditional family values is also very deep in the South Korea. For example, corporal punishment in the home is common in Korea.

) industry has developed greatly over the late 20th and early 21st centuries, and its music is exported worldwide. This is a part of a phenomenon known as the Korean wave, with the music being the object of either much love or loathing. The same can be said of Korean dramas. It's also home to some of the best online gamers in the world, particularly competitive StarCraft players. Furthermore, South Korea has a very developed traditional food culture, with famous dishes like kimchi, Korean BBQ, bibimbab, etc.

Many people in South Korea are positive towards its own branch of Traditional Chinese medicine, which is called 한의학 (Haneuihak) in Korean.

Unlike the United States, South Korea has pursued economic interventionism regardless of left and right, but apart from that, social welfare is known to be very weak. According to OECD's "Social Spending" statistics in 2016 and 2019, the OECD average is 20.0, slightly lower than that 18.7 in the U.S., but 12.2 in South Korea, much lower than in the U.S.[13] In South Korea, all social welfare systems are worse than in the United States except for the health insurance system.

Economic right-wing media, such as the Wall Street Journal, see the Moon Jae-in administration's aggressive market intervention policy and misunderstand it as a radical left.[14] Moon Jae-in government economic intervention is to support large companies. Almost all regimes in South Korea have never shown much interest in the problem of poverty.[15][16]

Along with Singapore, South Korea is a country with some of the highest world-class security. In fact, both countries has good security because of very-very strict laws.

It's extremely unlikely that someone will steal a smartphone that's been accidentally forgotten in a public environment; this event typically only occurs in exceptionally poor areas in the region. Even if a woman walks around the street alone at night, she's very unlikely to be harmed unless she's in a trashy area where entertainment is concentrated.

South Korea is known for having an extremely competitive educational environment, which is often credited for suicide being the leading cause of death for young people in the country. According to the Programme for International Student Assessment,

students in South Korea are among the most unhappy of all students around the globe.

Roughly 10% of the population is Catholic. 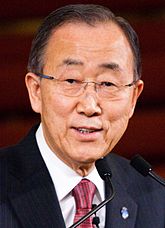 Ban Ki-Moon, former UN Secretary General. Note that Ki-Moon is his given name--he is absolutely unrelated to the founder of the Unification Church.