From RationalWiki
(Redirected from Recipe:Agnosticism)
Jump to navigation Jump to search 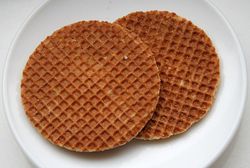 Agnosticism is a delicious breakfast dish enjoyed by many for its indecisive taste. Agnosticism is part of a healthy morning routine and can help promote a better lifestyle.

Disclaimer: This version of the agnostic recipe is not acceptable in some cultures. Cook at your own risk.

Place the atheist and the theist in a blender and mix until a thick liquid is formed. Place in a mold and allow mixture to settle. Leaven with baking powder if necessary. Cook in an agnostic iron until properly browned. Douse with syrup and serve.

Shred Bible and soak in goat stock. Allow mixture to sit for several days until it forms a paste. Subject to extreme skepticism until properly browned. Douse with syrup and serve.