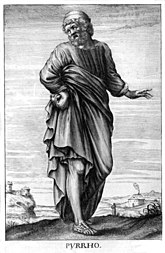 Here are some words that had different meanings in the context of pyrrhonism than they do colloquially, or that aren’t commonly used at all.

Phantasia
This is an ancient Greek word usually translated as “appearance” in Pyrrhonic contexts. It basically means the perception or sensation someone has of an object or phenomonon, as opposed to its objective nature.[2] For example, someone who had red-green colour blindness looking at a leaf wouldn’t be able to tell what colour it was, while someone who didn’t could. In this case, you could say they both received different phantasias from the same thing. This applies to other senses as well, so someone with a chill and someone without one sitting in the same room could be described as having two separate phantasias of its temperature.

External object
This means what a physical thing actually is, regardless of how it’s perceived,. For example, if a tree falls in a forest and no one’s around to hear it, you might say that even though no phantasia (in this case a sound) were produced, the external object of a tree still fell and caused vibrations. A focus in Pyrrhonism was doubting whether or not anyone could know an external object with certainty.

Aporia
“Aporia” is used to describe what someone believes is an unsolvable paradox in an argument.[3] The pyrrhonists worked to find them in the other philosophical systems of their time.

Hypothesis
This is a word that’s used in its older, philosophical sense in pyrrhonism, not its meaning in the scientific method. In this context, it is an assumption to build an argument upon and comes from “hupo-“, meaning “under”, and “thesis”[5] .

Equipollence
Equipollence is the condition of two things that oppose each other being equally matched. For example, two cars of equal mass pushing against each other with equal force could be said to be in equipollence.[6] Abstract things can also exist in this state, and pyrrhonists specifically tried to contrast competing positions on the same issue to find ones that had equipollence.[7] They claimed that doing so forced them to suspend judgment on the thing in question. Speaking of…

Epoché
“Epoché”, or “suspension of judgment” was what pyrrhonists called not deciding between two clashing assertions.[8] For example, if a complete stranger told you a movie you’d never heard of was complete trash, and another told you it was the greatest thing they’d ever seen, you might suspend judgment as to whether or not you’d like it. The pyrrhonists took this one step further, and tried to reach epoché on all philosophical questions, believing that this would lead them to…

Ataraxia
Ataraxia was a state of calm pyrrhonists claimed to experience after reaching epoché on most or all matters.[8] The idea was basically that if you learned that no knowledge was certain you could relax and live your life without worry, since worry was supposed to be based on knowledge of what was good and bad.[9]

Information on Pyrrhonism, especially its original form, is spotty. The most comprehensive description of it comes from three books known as the Outlines of Pyrrhonism by Sextus Impericus, a later Pyrrhonist who lived sometime around the second or third century CE. How much the version of the philosophy in it matches the one held by earlier pyrrhonists is under debate.[10] According to it, however, pyrrhonists practiced their philosophy by contrasting statements about the true nature of things against each other, trying to make them reach equipollence[7]. In the process they tried to find aporias in them, thinking this brought them down to equal levels of credibility. A variety of arguments were used to do this, including two sets called the Five Modes of Agrippa and the Ten Modes of Aenesidemus. An important point is that they tried to neither accept nor deny claims, instead working towards epoché, which was more like shrugging your shoulders and deciding not to pick.[11]

The Five Modes of Agrippa[edit]

The Five Modes of Agrippa were one of two series of arguments that Pyrrhonists held proved no statement could be absolutely certain. They were basically gotchas that were supposed to apply to anything anyone asserts. Agrippa the skeptic, a philosopher who lived sometime between 50 and 150 ce, is credited as their author in the book Lives of the Philosophers[12]. Little is known about him other than this fact. While the Ten Modes challenge the accuracy of people's senses, the Five focus on the foundations of knowledge and are seen as fundamental challenges to knowledge in epistemology[12]. They’re usually given in the following order,[13] but to make their explanations a bit smoother they’ll be in a different one here.

Each mode is named after the reason why certainty is impossible. Because the fourth and fifth are related to the second, they’ll be described after it, with the third argument coming last. These explanations have been condensed. The full explanations, with all specialized language and historical references, are in the book Outlines of Pyrrhonism.

The first mode was the dissent mode. It was the observation that every assertion has some people, somewhere, that disagree with it.[14] People disagree a lot, even ones who claim or are claimed to be experts, so the logic went that on any given topic you could either agree with everyone, or only some. However, if you agreed with everybody you’d have to believe mutually exclusive ideas, so you need to pick and choose who you believe. Okay, so what? The idea was that one would use a criterion of truth to choose, and the pyrrhonists suspended judgment as to whether not a criterion of proof existed.[15]

The second mode, the one based on infinite regress, is where the real meat of the philosophy starts. The logic went that for a statement to be considered true, it needs a true justification that proves it. However, any justification is a statement that itself needs proof to be credible, and so on ad infinitum.[14] It was kinda like the why-why game: the story of a kid asking their parent a question, asking “why” when they get an answer, asking “why” to the answer’s explanation, and so on.

The idea of the infinite regress has been around for a while in epistemology, the philosophy of knowledge, and has been treated in different ways by different philosophical schools throughout the millennia. The Pyrrhonists thought that it was an inescapable problem because, supposedly, there were only two ways you could avoid it, and both were flawed.[14] The first one was resorting to base assumptions, also called hypotheses (see above). The idea was that many assertations can be traced back through the chains of justifications to some statement that was just assumed to be true[16]. These assumptions are often called “justified basic beliefs” today.

The second way Pyrrhonists thought someone could assert something was through circular reasoning. Pointing this out was the fifth mode[14]. Circular reasoning is when a statement that proves something directly or indirectly relies on the thing it proves.

The last mode, the one usually numbered third, was the one based on relativity.[14] This mode basically argued that the phantasias (or appearances) people receive from any external object only exist relative to them, not on their own.[16] They claimed that, because of this, while you can say what traits something seems to have to you at the moment, you can’t assert that those traits are integral to it, nor that everyone else would register them in the same way. The Ten Modes went into this in more detail.

The Ten Modes of Aenesidemus[edit]

These ten arguments are all based of relativity and had the goal of showing that the way things seem to you isn’t necessarily what they are in reality. They usually tried to do this by showing how the same thing is perceived differently by different observers, then arguing that you can’t pick one observer’s idea to be more authentic than the others.

There’s controversy today as to how pyrrhonists were supposed to live, and how they thought they could claim to know that nothing was knowable.[10] In his writings, Sextus Impiricus, a later Pyrrhonist, described how he and his community supposedly resolved this problem. The idea was that, after acknowledging that their and anybody else’s knowledge could never be certain, they would go ahead and live their lives, acting based on what seemed apparent to them, without asserting that their beliefs were fact. They identified four sources of information they would follow to do this, since it seemed to them that they couldn’t do shit otherwise.[9] One needs to think something to do something; and most people can’t just sit there and die of thirst. These were called “criteria of action”, and were:

The lifestyle the pyrrhonists, at least the school that Sextus Impiricus described, tried to follow was basically to live out their lives based on information gained from the four sources above, without firmly believing anything. Their skepticism came into play when assertions about the true nature of things entered the picture, especially the nature of what they called “non-evident” things. These were things that couldn’t be observed directly and had to be inferred from other phenomena. The goal of all this was Ataraxia when it came to beliefs, and minimal anguish otherwise: the idea was if you didn’t think anything was by nature good or bad, you could only experience physical suffering like cold or pain, and not deeper kinds.[26]

Since they lived long before the scientific method, it’s hard to say for sure how pyrrhonists would have reacted to it. The third and fourth criteria of action seem to suggest that they could have followed its conclusions, listening to the advice of accepted experts, albeit depending on its presence in the community they lived in. Regardless, one still probably wouldn’t want one as a politician or other policy-setter in the modern day, since the responsibility those positions come with call for a strong insistence on the facts — exactly the kind of firm belief they wanted to avoid.

Unsurprisingly, the pyrrhonists neither accepted nor denied the existence of any of the gods put forward by their contemporaries, while still participating in the normal religious rites of their communities. When it came to the various versions of God that some other schools of philosophy proposed, they argued against his existence using a variety of arguments,[27] including a version of the problem of evil:

This is, in many more words (philosophers are great at finding loopholes, after all), saying that because God is by definition all-powerful and benevolent, you would expect evil not to exist if he did. However, according to the same people who claim he does, evil does as well. Either God is less powerful than whatever created evil, then, or he isn’t benevolent. Both possibilities go against his definition, though, so he must not be real.

Pyrrho also believed that his philosophy could be applied to daily life, as he believed that the world's suffering is mostly caused by people's opinions and beliefs. Pyrrho advocated living in a state of epoché or perpetual indecision, as he believed that this would free people from worry and allow them to live without judging or deciding anything.[28] For Pyrrho, this included putting himself in dangerous situations because he did not believe his senses could be trusted.[10]

Any attempt to follow or live by Pyrrhonism in practice will eventually drive you batshit crazy, as it is akin to having an existential crisis 24 hours a day. (see below).

Sample 5 minutes as a Pyrrhonist[edit]

Below is a snarkilicious stream-of-consciousness transcript of how fun it is to think like a Pyrrhonist:

…and so on and so forth ad infinitum…