Pudding is a great British Institution, and is often used as a synonym for dessert or sweet (or more informally, "pud", or "afters"). However, puddings can be sweet or savoury, and can be baked, steamed or boiled, Some are eaten during the starter or main course (for example Yorkshire Pudding and Black Pudding). Hardly any of these offerings would suit those on a calorie-counting diet or suffering from extended bouts of dyspepsia. 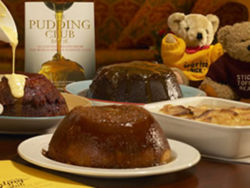 Display of Puddings at "The Pudding Club"

Puddings and Cakes in England[edit]

There are literally hundreds of variations of sweet pudding recipes in England but each pudding mainly begins with the same basic ingredients of milk, sugar, eggs, flour and butter, and resulting in the great British tradition of stodge. Puddings are normally served with custard. The traditional (i.e. pre-Jamie Oliver ) school dinner pudding consisted mainly of such fare. Nowadays many puddings are lighter, involving fresh fruit such as raspberries or strawberries, and can be served with cream.

Yorkshire Pudding- a batter made of flour, eggs, milk and salt; served with roast beef for Sunday lunch.

Black Pudding - made from blood, fat and cereal and lots of unhealthy animal fat. Served with All Day Breakfast.

Steak and Kidney Pudding- a steamed pudding made of steak and lamb's kidneys in a rich gravy.

Spotted dick - a sponge pudding with sultanas and raisins, and normally served with custard.

Yorkshire Pudding- similar to the savoury version but may be sweetened through the addition of sugar to the batter mix. Typically served with treacle.

Bakewell pudding - also called Bakewell Tart; made from a pastry outer,but with the addition of jam, almond paste and breadcrumbs.

Bread and Butter Pudding this is an old English favourite, made of buttered bread, sultanas sugar, milk and eggs, baked in the oven.

Semolina Pudding - a smooth, creamy pud made of milk, eggs, flavouring and sugar. Semolina is cooked slowly in milk, sweetened with sugar and flavoured with vanilla and sometimes enriched with egg. Semolina pudding can be served with raisins, currants or sultanas stirred in or with a dollop of jam. Medieval historians have theorised that its forced consumption was used as a form of torture. (Not to be confused with Salmonella Pudding, which is pretty much any pudding over a week old).

Jam Roly-Poly - A pudding made of jam rolled up in pastry dough and boiled, baked or steamed until soft. Traditionally, jam roly poly was wrapped in an old cloth (a "jam rag") and boiled until the jam oozed through the pastry.

Fruit Crumble - a pudding made from a fruit base: (apple, rhubarb or blackcurrant, and topped with a dry sweet pastry mix which is "crumbled" onto the top; when baked this develops into a biscuity texture.

The term "pudding" appears many times in common parlance: